‘Start this weekend. It is never too late to cut down your contacts, cancel plans, or avoid a crowd’ 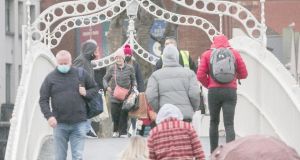 The State’s Chief Medical Officer Dr Tony Holohan has said the figures across all the key indicators of Covid-19 disease severity “continue to give us strong reason for persistent, ongoing concern”.

He was speaking as the Department of Health reported 527 new Covid-19 cases and five further coronavirus-related deaths on Saturday.

The five-day moving average is now 469. The National Public Health Emergency Team (Nphet) team has said previously that once cases move over 400 a day a  three-week intervention would be required to suppress the spread of the virus.

Dr Holohan said: “As we head into a week with uniquely risky inter-household and inter-generational mixing, please remember to act responsibly. Start this weekend. It is never too late to cut down your contacts, cancel plans, or avoid a crowd.”

Of the new cases reported on Saturday, 271 are men and 255 are women and 65 per cent of them are under 45 years of age. The highest number of new cases is in Dublin at 191, followed by 54 cases in Cork and 44 in Donegal. The remaining cases are spread over 22 other counties.

In England, a new “stay at home” order covering London and much of the south and east of England was issued on Saturday evening by prime minister Boris Johnson in response to a new fast-spreading strain of coronavirus.

New tier four restrictions will be introduced in areas such as London, Kent, Essex and Bedfordshire from midnight.

A stay-at-home order will be issued to residents in these areas and all non-essential shops must close.

For the rest of the country, the three household mixing limit has been cut from five days over Christmas, to just Christmas Day.

The restrictions were announced by the prime minister at a hastily convened press conference on Saturday, alongside the chief medical officer, Chris Whitty, and the chief scientific adviser, Patrick Vallance, following a cabinet meeting this afternoon.

They will initially be in place for a fortnight.

Mr Johnson announced the severe new restrictions after being presented with evidence on Friday night that the new strain of coronavirus identified in London and in the southeast is spreading more rapidly than the previous strain.

Mr Johnson said the government’s New and Emerging Respiratory Virus Threats Advisory Group (Nervtag) estimated the new variant may be up to 70 per cent more transmissible.

Scientists do not yet have evidence that the new variant has a higher mortality rate, or that it affects the effectiveness of vaccines or treatments for Covid.

Dr Cillian de Gascun, the Director of the National Virus Research Laboratory, said the new strain had not been detected in the Republic.

He said work was under way to try and identify the virus should it appear here and he added that the new restrictions announced in England should hopefully mean it was not imported.

On Saturday evening a spokesperson for the Department of Foreign Affairs said there was no change to the travel advice for passengers intending to travel to the Republic from England.

In Northern Ireland another 17 people with Covid-19 have died and a further 640 new cases of the virus also been reported. Initial reports suggest there is no immediate plan to change the Christmas Covid-19 restrictions in Northern Ireland.

Scotland will go back into lockdown from Boxing Day and a planned easing of restrictions over Christmas has been scrapped, First Minister Nicola Sturgeon said.

A ban on travel between Scotland and other parts of the UK - except for essential purposes - will remain, with Ms Sturgeon saying she will speak to police and transport operators to see how this can be “strengthened”.

In the Republic, when the Cabinet meets on Tuesday it will consider advice from the National Public Health Emergency Team (Nphet) regarding new restrictions on hospitality and household visits in response to rising case numbers.

Its letter to the Government recommended “Level 3 plus” restrictions from December 28th, during which inter-county travel would be halted and restaurants and gastropubs would revert to takeaway services only.

However, it is understood the Government is likely to opt to delay restrictions on hospitality and household visits until December 30th and for inter-county travel to be allowed until January 6th.

There is frustration in the hospitality sector at having to wait until Tuesday for a Government decision.

The Restaurants Association of Ireland has called for an urgent meeting with the Taoiseach and Tánaiste to discuss their plans for the hospitality sector.

Earlier, Dr Tomás Ryan, an associate professor in the School of Biochemistry and Immunology at Trinity College Dublin, called for a policy of “aggressive suppression” to get the number of cases in the country down to 10 per day, with the virus then kept low through effective test and trace services.

He suggested a five or six-week “relatively strong” lockdown, beginning on St Stephen’s Day, could get Ireland to this level of cases by the end of January.

He said this proposed six-week lockdown would be more effective than previous lockdowns of similar lengths as it would start from St Stephen’s Day and run during the “most sedate time of the year”.

The alternative was nine to 12 months of repeated lockdowns, he said, adding the “Government’s strategy of living with the virus has failed”.

“We will not get back to normal based on vaccines alone until autumn/ winter 2021,” he said.

Fine Gael TD Neale Richmond said Nphet had given “very clear advice” but the Government must look at “all the factors”, including the impact of restrictions on the economy, society, and wider public health.

Sinn Féin’s Eoin O’Broin TD agreed with an all-Ireland strategy, but disagreed with the 10 cases-a-day approach suggested by Dr Ryan.