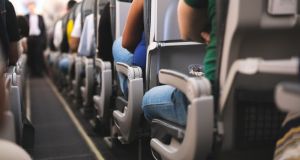 A passenger said one flight from London to Belfast carried more than 100 people. Photograph: iStock

Despite a 48-hour ban on flights from Britain to Ireland coming into effect from midnight on Sunday, passengers can still travel to the island of Ireland on one of 42 flights scheduled to arrive in Belfast and Derry on Monday.

One flight arriving into Belfast from London this afternoon was said to contain more than 100 passengers, according to one woman onboard. These passengers are due to travel to Dublin on a coach provided by the airline, she said.

Erica, who did not want to give her surname, said her British Airways flight was “not 100 per cent full” but around 135 people were on board with many rows containing three people. This particular flight carried people who had booked to fly to Dublin with the airline on Sunday but could not travel as the flight was overbooked, she said.

“There was zero social distancing in Terminal 2 (in Heathrow) last night… But almost everyone had masks on at all times,” she said. Erica said she will isolate and get a coronavirus test when back in Dublin and most people she spoke to on her flight were planning to do the same.

The travel ban between Britain and Ireland was imposed as a precautionary action following an announcement by the British government that a new variant of the coronavirus spreading in London and the south-east of England is more infectious.

Northern Ireland has not initiated a travel ban. Scotland’s first minister Nicola Sturgeon has imposed a strict travel ban between Scotland and the rest of the UK for the festive period. People living in Wales went into lockdown at midnight, while those living in London and the south-east and east of England have been placed in Tier 4 — the highest level of restrictions — for the Christmas period.

Speaking to BBC Radio Ulster, Northern Ireland First Minister Arlene Foster told BBC’s Good Morning Ulster it is “probable” the new strain detected in London is already in Northern Ireland and in the Republic too. She said four cases in the North have been detected as having a “different sequencing than other cases”. Samples from these cases have been sent to England for examination, she said.

A spokeswoman for Belfast International Airport said it had been expected that Tuesday and Wednesday would be the busiest days for Christmas travel at the airport.

Speaking on RTÉ’s Morning Ireland today, Minister for Transport Eamonn Ryan said the 48-hour travel ban to and from Britain will allow the Government to assess how the new strain spreads and to work with the UK Government and European colleagues to determine the next steps.

Mr Ryan said anyone who travelled into Ireland yesterday should restrict their movements for 14 days. He said he believes incoming passengers, and their families and friends, would “see the wisdom in that”.