Flights will not be accessible to those planning short trips to Ireland for Christmas, say Ministers 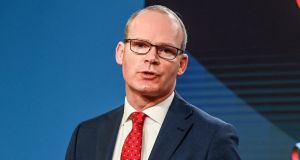 Minister for Foreign Affairs Simon Coveney said advice on inter-county travel “may change” and a “long Cabinet meeting” will take place on Tuesday to discuss all data and information. Photograph: Filip Singer/EPA

At least two consular flights are scheduled to fly from Britain to Ireland on Tuesday evening to get Irish residents stranded by the travel ban home, the Ministers for Foreign Affairs and Transport have said.

The flights will be operated by Irish airlines and at least one will depart from the London, Minister for Foreign Affairs Simon Coveney and Minister for Transport Eamon Ryan confirmed on Monday evening. The departure airport of the second flight will be decided based on demand from those who contact the Department of Foreign Affairs’ assistance line, they said.

Both flights will also be accessible to Irish-bound passengers who are travelling through British airports but have become stranded because of the ban, said the Ministers.

Arrangements are to be made with ferry companies to gain “exceptional access” to ferry services for the “small number of Irish residents” who are stranded in Britain after taking short trips in their vehicles, they added.

The announcement of “a minimum of two consular flights” follows Mr Coveney’s assertion that a “limited number of flights” would be arranged to repatriate Irish residents home. On Sunday, the Government announced it was banning flights to and from the UK for a minimum period of 48 hours, though that is likely to be extended after Cabinet meets on Tuesday.

In a statement, the Ministers said Tuesday’s two flights would be “open to Irish residents and transiting passengers only” and that there would be no access to people living in Britain who were “planning short trips to Ireland for Christmas”.

It is “essential” that anyone eligible to travel on the consular flights identifies themselves to the Department of Foreign Affairs, demonstrates their entitlement under the criteria and registers to be included on the flight by calling the department’s dedicated assistance line on +353 1 6131700, said the statement.

Those seeking to register for access to a ferry must also contact the assistance line to register.

The department said the decision whether or not to organise more repatriation flights would be kept under review. Those who do travel from Britain must self-isolate for 14 days, it added. They will also have to fill out a passenger locator form.

On Monday, Mr Ryan said it was “unlikely” that the ban on travel between Britain and the Republic would be lifted before Christmas.

Speaking on RTÉ’s Morning Ireland programme earlier, Mr Ryan said the Government had introduced the ban for an initial 48 hours as it was “appropriate to assess firstly how it’s working” while liaising with European colleagues and the UK government.

Aer Lingus said on Monday it was still operating flights from Ireland to Britain “in order to facilitate the repatriation of customers to the UK and those with connecting flights in the UK”.

“Customers whose flights have been cancelled are being contacted by Aer Lingus directly, and are entitled to a refund, voucher or rerouting at a later date,” said an Aer Lingus spokeswoman.

It is understood Aer Lingus may operate the Government’s repatriation flights from the UK although details have not yet been confirmed.

A Ryanair spokesman said all passengers affected by travel bans from the UK would receive an email notification and “be offered practical alternatives including free moves, re-routing or a refund”.

He said Ryanair would continue to operate flights which are permitted to fly to and from the UK but that any passengers who did not wish to travel during the five days prior to Christmas would be allowed to change their flight for any date up until March 15th with no change of flight fee.

Asked on RTÉ radio if the Government would be advising against travel between the North and the Republic, Mr Coveney said members of the public should avoid non-essential travel.

As a result of the rising cases, he said advice on this travel “may change” and a “long Cabinet meeting” will take place on Tuesday to discuss all data and information.

“That may mean introducing further restrictions, but we’ll have to decide when and what restrictions . . . given the growth in numbers,” he said.

On Sunday night, an extra flight was arranged to bring home about 300 Irish people who were stuck in Heathrow Airport in London.

As news of the ban on flights emerged, many Irish people booked a flight home on Sunday night in advance of the restrictions coming into effect.

Photographs and video footage of long queues forming in Heathrow’s Terminal 5 emerged on social media as passengers arriving at the airport found themselves unable to board a scheduled 8.55pm Aer Lingus flight to Dublin.

However, a second flight was made available, which took off from Heathrow Airport after 11pm on Sunday night and landed in Dublin Airport just after midnight.

Meanwhile, the Commission for Aviation Regulation (Car) has issued advice to passengers affected by the travel ban.

In accordance with Regulation (EC) 261, if a flight is cancelled, the airline must offer you the choice between re-routing as close as possible to the original departure time; re-routing at a later date; or a refund, the commission said.

Airlines are entitled to offer vouchers to passengers, but there is no obligation to accept them, Car added.

For people who were travelling through Britain but have not yet arrived, Car said they “would not expect” airlines to board these passengers as they cannot complete their journey.

“In these cases, passengers may be entitled to a full refund under Regulation (EC) 261 if their original point of departure was within the EU or their airline was an EU carrier.”

For transiting passengers who have already landed in Britain but are unable to complete their journey due to a flight ban, airlines are expected to offer alternative routing to the final destination.

Where this is not possible, airlines are expected to offer a return flight to their original destination where.

Passengers whose original departing point was outside the EU, and whose airline is not an EU carrier, are advised to contact the airline with which they booked the flight for advice on their options, Car added.

Anyone that is worried about being able to come home can contact the Department of Foreign Affairs on 01-6131700.