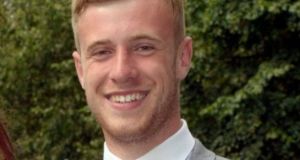 Cameron Blair (20) died after being wounded in the neck by a knife outside a house party in Cork on January 16th. Photograph: Denis Boyle

Gardaí are to send a file to the Director of Public Prosecutions (DPP) on Friday in relation to a teenager charged with the murder of a 20-year-old student in Cork city last month, a court has heard.

The boy (17), who cannot be named as he is a juvenile, was before Cork City Children’s Court on Friday morning for his third court appearance charged with the murder of Cameron Blair.

A second year chemical engineering student at Cork Institute of Technology, Blair from Ballinascarthy, Co Cork died at Cork University Hospital after being stabbed at house party in Cork city.

The teenager was brought before a special sitting of Cork District Court last month where he was first charged with the murder of Blair at Bandon Road, Cork on January 16th.

Det Garda Rory O’Connell gave evidence of the arrest charge and caution and told the court the accused made no reply to the single charge when it was put to him after caution.

On Friday at Cork Children’s Court, Insp Brian O’Donovan said gardaí were sending a file on the case to the DPP today and it should be with the DPP by Monday and he sought a two week adjournment.

Defence solicitor, Eddie Burke said he had previously requested a psychological assessment of his client but the request may have inadvertently asked Oberstown Detention Campus to carry it out.

Judge Mary Dorgan noted a letter from Oberstown in relation to the request and said she would now ask the forensic mental health service to carry out a psychological assessment of the boy.

She remanded the accused into continuing detention at Oberstown Detention Campus for a further two weeks and ordered him to appear again at Cork Children’s Court on March 6th.