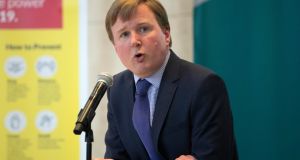 Dr Cillian De Gascun, chair of the Coronavirus Expert Advisory Group: ‘We know we need to get better, but it’s a huge improvement on where we were.’ Photograph: Colin Keegan/Collins

Ireland’s testing and tracing system for Covid-19 has been slowed by a range of technical issues, including data entry errors, a lack of automation and systems that cannot interact with each other.

These issues, including the absence of unique patient identifiers and a system for laboratory information management, have pushed the timeframe for testing and tracing beyond expert recommendations.

“They don’t all talk to each other . . . so that takes time to build into place and make sure it’s robust. We don’t have a unique patient identifier yet, we don’t have a national laboratory information management system.”

The HSE is hopeful of automating some processes by next Monday, including informing close contacts that they have been in touch with a confirmed case.

Dr Colm Henry, chief clinical officer at the HSE, said a “great majority” of people being referred for testing are swabbed within a day and a half. The median time between swabbing and contact tracing starting, he said, was at five days and coming down. More complex cases, such as those involving healthcare workers who would be in contact with a large number of vulnerable people, or people who do not speak English, or in some cases have passed away, were also affecting turnaround times.

However, he could not indicate when the process will be completed within 72 hours, generally seen by experts as the upper limit by which the process should be completed.

Dr De Gascun said: “We know we need to get better, but it’s a huge improvement on where we were,” he said. Last night, a further 107 cases of Covid-19 were confirmed, the lowest number since March 21st, alongside another 24 deaths. The total death toll is now 1,488, with 23,242 cases confirmed.

Elsewhere, a medium-term plan for a testing and contact tracing system is expected to cost about €500 million. This is in addition to the €1 billion annual bill for personal protective equipment in the HSE. Sources said the €500 million includes the cost of swabs for testing individuals and lab analysis. It is also likely to include costs of IT upgrades.

About 1,000 staff may be needed in the future to carry out tracing. At present Defence Forces personnel and Revenue Commissioners staff are involved. Sources said at some stage they would return to their substantive roles, requiring new personnel to come in.

Last Sunday, head of the HSE Paul Reid said a “future model” of testing and tracing is needed, beyond the current “wartime model”. The Department of Health said on Tuesday night the HSE’s testing plan has been agreed by its board and implementation was under way.

Elsewhere, a panel of scientific experts have warned that the UK government’s decision to exempt visitors from Ireland from a planned 14-day quarantine is a “serious loophole”. The group, chaired by the former chief scientific adviser David King, warned: “It will be perfectly possible for someone to fly from somewhere where the level of infection is extremely high, such as New York, to Dublin and then change planes to travel to London.”