Much of his work shows a passion for the west of Ireland, capturing Connemara landscapes, harbours and horse fairs 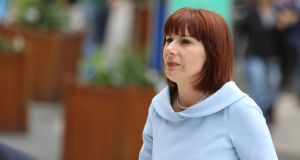 Minister for Culture Josepha Madigan: she described Maguire as “one of our finest landscape and figure painters”. Photograph: Nick Bradshaw

Maguire was born in Lurgan, Co Armagh, in 1930, and worked as an English teacher before eventually dedicating his time to the pursuit of painting. He became a regular name in auction catalogues and listings, with his landscapes and figure paintings highly sought after.

According to Whyte’s auction house in Dublin, Maguire had spent time with fellow artist Maurice C Wilks in his formative years, accompanying him on painting trips to Cushendun, Co Antrim. He later enrolled in evening art classes, joined the Lurgan Art Club, and by the early 1960s was exhibiting regularly with the Royal Ulster Academy. He resigned his teaching post in 1981, giving his complete attention to art.

“Much of his work shows a passion for the west of Ireland capturing scenes of Connemara landscapes, harbours and horse fairs,” according to Whyte’s.

In 2018, founder Ian Whyte included the painter in a collection of artists whose works he himself had wished he might have owned personally.

“One cannot be a gamekeeper and a poacher at the same time. What is in this catalogue is what I would love to have acquired.”

President Michael D. Higgins paid tribute to Maguire saying his painting Clifden Fair, Winter was the first one he bought with his first salary from UCG.

“That painting was much loved, and one all my children grew up with,” he said.

“Cecil Maguire’s work, oil on board, captured images of the west coast of Ireland in a quite wonderful way,” he said.

He had a lovely warm personality, which I had the experience of encountering many times, including last summer in Roundstone. He will be missed by his family, his many friends and admirers,” Mr Higgins added in a statement.

On Tuesday, the Minister for Culture Josepha Madigan described Maguire as “one of our finest landscape and figure painters”.

“Cecil spent much of his time in the west of Ireland and painted the Connemara landscape where he lived in Roundstone and its environs with such fondness. I know that he felt very much at home there,” she said.