Teachers seek return of money they were penalised due to strike 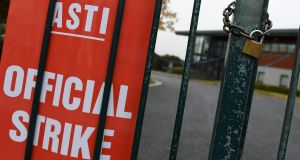 ASTI said it wanted the timing of incremental pay increases returned to the original dates that applied prior to the dispute. Photograph: Clodagh Kilcoyne/Reuters

Second-level teachers are seeking reimbursement of all money they lost from financial penalties imposed due to industrial action nearly three years ago.

The Association of Secondary Teachers Ireland (ASTI) said it wanted the timing of incremental pay increases returned to the original dates that applied prior to the dispute as well as the payment of all losses incurred by members as a result of the penalties.

The union believes its case has been strengthened as a result of the Government’s decision not to impose similar penalties under financial emergency legislation (known as Fempi) on nurses after their recent strike.

On foot of its industrial action in 2016-17, the Government used Fempi to impose penalties on ASTI members, including a freeze on incremental pay rises .

When the industrial action ended in June 2017 the Government lifted these measures. However, the original dates for the payment of increments were not restored, leaving union members with ongoing losses compared with the situation had the increment freeze never been put in place.

The amounts involved vary depending where an individual teacher stood on the pay scale and the date on which their increment was originally paid. However, sources said €1,000 in losses could be at the low end of the scale and it could be €2,000 or more in some cases.

“It has made every public service union uncertain about what the consequences of, say, taking a strike day would be.”

Speaking ahead of its annual conference next week, Mr Christie said there was a time when union members lost a day’s pay if they went on strike. He suggested that Fempi legislation allowed Ministers to apply additional sanctions .

He said that, arising from the INMO dispute, unions did not know whether or not the Government was returning to the days when they would just lose a day’s pay or whether, if it was dealing with another, less popular public service group than the nurses, it could once again decide to apply the Fempi provisions.

Mr Christie said in a radio interview at the height of the INMO dispute that Taoiseach Leo Varadkar had implied that, because nurses were popular with the public, the Government could not treat them in the manner it had second-level teachers.

The issue of the Fempi penalties as well as the two-tier pay system for teachers appointed since 2010 and general pay issues in the wake of the nurses’ settlement are likely to feature strongly at the conference in Wexford next week.

The ASTI said it was concerned that second-level teaching was becoming increasingly unattractive for young graduates.

It said teachers appointed since 2010 would, under current arrangements, earn significantly less than their longer-serving colleagues over the course of their careers.

Separately the ASTI said new research showed it was totally vindicated by its advice to members last December not to engage further to implement individual education plans for pupils with special needs until a national training programme was fully rolled out.

It said survey of 1,300 members it had carried out in association with polling company Red C had found that lack of training, the absence of allocated time for planning and large class sizes were the biggest challenges facing second-level teachers in supporting students with special education needs.

The union said that in Ireland up to 25 per cent of second-level students were estimated to have additional and special education needs.

“Fifty-five per cent of mainstream teachers who had participated in education planning for [special education needs] students said they found the process time-consuming, while 50 per cent said they did not believe they had adequate training to carry out this work. “

The union said that only 5 per cent of respondents had a special education needs qualification while only 22 per cent had participated in such training in recent years.

“While co-ordination of [special education needs] planning is sometimes delegated to assistant principals, it frequently becomes an unpaid duty for classroom teachers. “

The ASTI maintained that 68 per cent of respondents said that smaller classes would be better for students with special educational needs.