Eight new cases confirmed in Northern Ireland, where there was also no new deaths 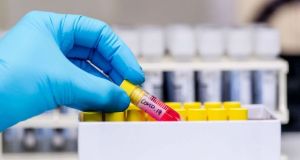 There have been 92 further cases of Covid-19 identified in the State, the National Public Health Emergency Team (NPHET) reported on Thursday, but there have been no further deaths here from the disease.

The latest figures bring the total number of confirmed cases of Covid-19 in the Republic to 26,929.

Dr Ronan Glynn, acting chief medical officer at the Department of Health, appealed to those living under renewed coronavirus restrictions in counties Kildare, Laois and Offaly to “hold firm”, although he said cases are also occurring in several other counties around the country.

“We expected that this week the daily figures we report would rise and fall,” he said. “NPHET is closely monitoring all trends, patterns and changes in the data, including not just case numbers but locations, age groups, and sources of transmission.

“This is still about a united, whole-of-country approach. The only way we can effectively suppress Covid-19 across Ireland in the long term is if we act together to protect each other.”

Of the new cases, 43 are associated with existing outbreaks or are close contacts of a confirmed case. Twelve have been identified as community transmissions.

The geographical breakdown by county is 24 cases in Dublin and also in Kildare; eight in Limerick; six in Carlow; six in Kilkenny; five in Meath, and five in Clare. A combined further 14 cases have been identified in Cork, Donegal, Kerry, Laois, Louth, Monaghan, Offaly, Waterford and Wicklow.

“Living with Covid-19 has undoubtedly been difficult and this pandemic has adversely impacted on people in many different ways. We know that what the public health advice asks you to do can be difficult, but we are asking you to stay the course with it,” Dr Glynn said.

On Wednesday, NPHET said the reproduction rate of the virus had fallen this week from 1.8 to 1.6, and reported a slight drop in new cases to 40. However, Prof Philip Nolan of NPHET’s modelling advisory group had said that despite that trend Ireland is still experiencing a sharp and worrying increase in the spread of the virus.

Eight new cases of Covid-19 were reported in Northern Ireland on Thursday, bringing the total number of cases there to 6,225.

The North’s Department of Health also said there had been no new deaths from the virus notified on Thursday. The department’s total figure for deaths from the disease in the North remains at 557.

According to the most recent data, there are three confirmed cases of people with the virus now in intensive care beds in hospitals in Northern Ireland.

There are also three active outbreaks of Covid-19 in care homes there. Since the start of the pandemic, there have been 180 such outbreaks.

An analysis of all cases across Northern Ireland showed that since the start of contact tracing on May 24th a total of 11 clusters with five or more people have been identified.

In addition, there were 20 clusters across Northern Ireland with fewer than five people. A cluster is defined as two or more confirmed cases among individuals associated with a key setting, with illness onset dates within a 14-day period.

Key settings which have seen clusters to date since May include workplaces, retail or hospitality premises, domestic gatherings, and sporting settings.