Where are they now? The mixed fortunes of gang linked to Det Garda Donohoe killing 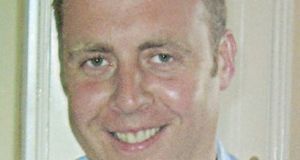 Det Garda Adrian Donohoe was shot dead in 2013 as he stepped from his Garda car after he and a colleague arrived at Lordship Credit Union, Bellurgan, Co Louth, to provide an armed escort for staff carrying cash. Photograph: Garda/PA

The gang members who killed Det Garda Adrian Donohoe have experienced mixed fortunes since the fatal shooting 7½ years ago; some drifting through life unemployed, involved in Borderland crime while others are working for themselves and leading apparently successful lives abroad.

Det Garda Donohoe, a 41-year-old married father of two, was shot dead on January 25th, 2013, as he stepped from his Garda car after he and a colleague arrived at Lordship Credit Union, Bellurgan, Co Louth, to provide an armed cash escort for staff carrying cash.

The prosecution alleged Brady was the gunman who fired the gun that killed the detective. But the other four men present could also be prosecuted for capital murder – the killing of a Garda member carrying a 40-year sentence – under the legal principle of joint enterprise.

That means while the other four gang members did not fire the weapon, they could be convicted of the murder because the gun was sourced and loaded in advance and produced on the night to further the gang members’ shared goal of stealing cash from the credit union.

All five men, ranging in age at the time from 20 years to their late 20s, were part of a south Armagh-Louth gang specialising in a range of criminal activity including armed robberies, diesel laundering and theft for resale of vehicles and plant machinery.

At the time Det Garda Donohoe was shot dead he was investigating Brady for an alleged role in an armed-gang robbery on Dundalk race course in 2011. The same gang was also suspected of a previous robbery on Lordship Credit Union, in August 2011, though Brady was not suspected of involvement in that crime.

In recent years there have also been a spate of ATM robberies on both sides of the Border, during which the machines have been ripped from bank and shop exterior walls. Gardaí believe some of the four suspects for Det Garda Donohoe’s murder who are still at large were involved in some of those crimes.

Since the night Det Garda Donohoe was murdered during the €7,000 Credit Union robbery the men have spent time in the US, Britain, Australia, the Republic and Northern Ireland. Of the four suspects for the murder, two reside in the US while two others still live in Ireland where their status as murder suspects is widely known.

One of the men who lives in Northern Ireland at present has, like Aaron Brady, settled down with his partner since the 2013 murder and has become a father. Now in his early 30s he is unemployed, though his partner works, and is before the courts on unrelated charges. The Garda and the PSNI suspect him of several armed robberies and ATM thefts on both sides of the Border. He is believed to have taken part in the Lordship Credit Unit robbery in August, 2011, during which more than €22,000 was stolen, and also the armed robbery at the Dundalk race course the same year.

Where are they now?

Another of the suspects, who lives in Armagh, was the youngest of the gang at the time of the robbery and has been heavily involved in fuel laundering with Brady. Like Brady, his phone was switched off for the period of the robbery, as were the phones of the other main suspects. Information gleaned from an examination of his phone appears to implicate all of the suspects. He has spent time in Australia since the murder and when interviewed by gardaí refused to engage substantively.

Two of the other suspects, who are well known to each other, have been working for themselves in the construction trade in Boston in recent years. They still live there at an address known to Irish and US law enforcement.

One was especially close to Brady, though it is believed they have not spoken for several years. That suspect’s car was spotted close to the crime scene in Lordship in the days before the robbery and murder and was also identified close to the location on Clogherhead, Co Louth, where the getaway car used by the gang on the night of the murder was stolen.

By the time Brady was arrested in May, 2017, in New York, he had settled down there and was earning $65 per hour in a construction job. He first went to the US in 2013 and initially worked with one of the other suspects for the murder, who was already established there at that point.

The two men in Boston helped him settle and aided him in finding work, before they fell out with him. Like Brady was at the time, they are now living comfortable lives in the US, with plenty of money and, for now, untroubled by the investigation in Ireland. However, they are being monitored by US law enforcement and gardaí say they are confident Brady will not be the last man charged in relation to the robbery and murder.