Rescued women ‘weak and tired’ but ‘thankful’, says fisherman who found them 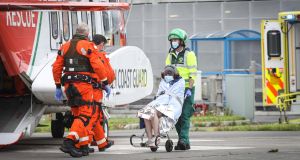 One of the two women rescued in Galway Bay being taken off the Coast Guard helicopter at University Hospital Galway. Photograph: Aengus McMahon

The fisherman who rescued two young women clinging to the buoy of a lobster pot off Inis Oirr after 15 hours in the water has said they were “fairly shook” and “delighted” when he found them.

Patrick Oliver and his son Morgan (18) found the women, aged 17 and 23, around 20 miles out from Furbo Beach in Co Galway where they had been paddle boarding on Wednesday evening.

Mr Oliver, from Claddagh, said the women spent the night on their paddleboards and held onto each other overnight. He said when daylight came on Thursday morning they saw a buoy, paddled towards it and clung onto it until they were found.

Mr Oliver said he was on the phone to a friend who was also out searching for them when his son spotted the women before midday.

“They were good, they were waving their paddles up in the air, they had us spotted,” Mr Oliver told RTÉ’s Liveline on Thursday.

“They were weak and tired of course but they were sitting up and there was a little bit of chat out of them. We got them into the boat and brought them into the island. The chopper landed there on the island.”

Mr Oliver said both women were “very thankful” after he pulled them on board his boat ‘Johnny O’ and wrapped them up in jackets, oilskins and hats “to get them warm straight away”. He said they “weren’t really” shaking but “definitely in shock”. He took them onto Inis Oirr and they were brought to University Hospital Galway.

He said the women had done the right thing by not panicking and they were “lucky” the weather had been mild recently.

Mr Oliver said when he heard they were missing on Thursday morning, he “couldn’t sit at home” and headed out with his son. He said he was “delighted” for the young womens’ parents and that he had been thinking of “the poor mother on the beach all night looking out for them”.

Mr Oliver said he has been a fisherman for the last 20 years and has helped in a number of rescue operations. His father and grandfather were also fishermen.