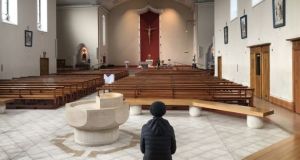 Taoiseach Micheál Martin has promised to consider reopening churches and other places of worship for regular services under Level 3 of Covid-19 restrictions, the Irish Church Together group has said.

Mr Martin held a meeting online on Tuesday evening with a number of religious and other faith groups about Mass and other services under the Government’s restrictions.

Speaking on behalf of Irish Church Together, which represents Catholic, Protestant, Pentecostal and new churches around the country, Paddy Monaghan said it called for regular services and Masses be allowed to resume if the country moves to Level 3 next month.

Under Level 3 of the Government’s Living with Covid-19 strategy, religious services remain online and places of worship are only allowed open for private prayer. Weddings and funerals are allowed to take place with a maximum of 25 people.

“We were all asking the Taoiseach almost the same thing: Agree to reopen the churches at Level 3. He has promised to consider that,” Mr Monaghan told The Irish Times.

Mr Monaghan said the meeting was also attended by Church of Ireland Archbishop Dr Michael Jackson, Catholic Archbishop of Dublin Diarmuid Martin and representatives from the Methodist Church, the Presbyterian Church, the Islamic community, and the Humanist Association and others.

“We all committed that social distancing, all the precautions that were there at Level 2, would be followed. I made the additional point that in our opinion it should be open for regular mass and services, not special events like Communions, Confirmation or Baptisms because unfortunately what has tended to happen then is there are private parties happening on the basis of those even though the parish priest has said ‘please don’t do it’, people go and do it.”

Under Level 2 restrictions, churches can open for religious services with protective measures in place for a maximum of 50 worshippers.

The Government’s guidance states: “Where the premises allows for a capacity of greater than 50 this may be permitted in separated sub-groupings of no more than 50, with additional protective measures as per guidelines.”

The isolation felt by Catholic priests from the shutdown has been highlighted by Fr Tim Hazelwood, a member of the Association of Catholic Priests (ACP).

He said lots of priests “are feeling very alone and isolated”.

“No matter what way you dress it up, especially a diocesan [priest] living in the country, you’re living on your own. The summer wasn’t bad, we had good weather, we could go out but now you close then door at 5 o’clock, we’ve no meetings to attend.”

For a lot of priests now, “the isolation is real, the loneliness,” he said.

Part of the ACP leadership team, he said that where many dioceses were concerned “we receive contact if it’s to do with money or data protection, or something like that. It’s up to ourselves to find the support that we need.”

It was “much worse” for retired priests or those out of ministry, he said.

With the first lockdown “Masses stopped, churches closed, all that we were used to doing sacramentally stopped,” he said. He himself only began saying Mass online, eventually.

“I don’t like going online. The idea of even looking at a screen, I find find it totally unnatural, looking at a phone saying Mass.” He had been “meeting people all my life” and so found online “heartless. I find it appalling. I don’t like it.”

He did not go online “at the beginning but now I’m doing it and part of it was, and I think for a lot of priests, they’re nearly being forced into doing it. A lot of it is to please people. And I know people are happy that we’re doing it, the local man is saying the Mass and that’s what people like to see.”

Financially, priests were “down 60 per cent” but they “still have to pay their insurance, their wages, upkeep, and that’s a huge strain.” Then there was “the phone call or the letter from the diocesan office, they want money for this, money for that and it’s not there.”

On top of which there was “the collapse that’s happened.” When the previous lockdown was lifted many people “didn’t come back. I met lots of people and they just said we got out of the habit,” he said.

Fr Hazelwood was speaking at a recent online meeting of the ACP.