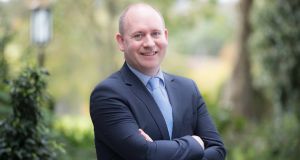 Dermot Kelly, co-owner of the Shannon Springs Hotel in Shannon, Co Clare. ‘You don’t know how long we’re going to be in this situation for.’ Photograph: Eamon Ward

Hotelier Dermot Kelly, who co-owns the Shannon Springs Hotel in Shannon, Co Clare, has been putting the final touches to a €2.5 million development in recent weeks that will add 17 bedrooms, more meeting rooms and a new lobby.

Currently, however, the hotel, six miles from Shannon Airport, has little need for extra space, with business having dried up since the start of the pandemic. Shannon Airport is also now facing four weeks without Ryanair flights.

Mr Kelly bought the hotel with his business partner John Gavin in 2015. A €2.5 million investment brought the hotel from a two-star to a four-star property, while the latest investment, costing the same amount, is “in its final weeks”, he said.

The hotel is popular with outbound Shannon passengers, who stay the night before an early morning flight, while it is also a popular base, too, for people who have flown in to work at any one of a number of the multinationals based in the Mid-West.

“There has been a lot of conversations with the bank since early April. They’ve allowed us to continue on, but it is a worrying time. The six-month moratorium is up for most people on the loans. From speaking to hoteliers around Clare, there are a lot of worried people out there.

“You don’t know how long we’re going to be in this situation for,” he said as he absorbed news that Shannon will have no passengers at all between November 14th and December 12th.

It also found that without the airport’s 20 Aer Lingus Heathrow flights a week, some 2,800 jobs would be lost and GDP would reduce by €459 million. These flights will not return until at least next April.

Shannon has had no transatlantic flights for months, and the loss of American tourists is felt deeply, since they spend an average of €717 per visit, nearly three times the amount of those coming from the United Kingdom.

“It’s a huge blow to the region, not alone to the hospitality sector but to all the industry that there is throughout the Western seaboard. A lot of the companies rely on the air access for getting their employees in and out.

“We’d call on Government to put the financial resources in place to secure the airport, so it’s there when the recovery comes. It’s such a fine asset, it can’t just be left idle,” said Mr Kelly, who is chairperson of the Shannon branch of the Irish Hotels Federation.

PJ Keogh, owner of Shannon-based bus company PK Travel, says that his business has already collapsed, and will drop even further due to this week’s news. “We’re down 80 per cent minimum, that was up to last week. After this I’d say it’ll be nearly nil.”