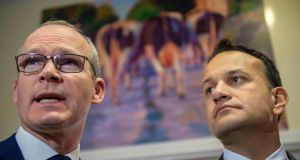 Taoiseach Leo Varadkar has pledged that Fine Gael will use national funding to make up any shortfall in support for Irish farmers as a result of proposed Common Agricultural Policy reform at European Union level.

Mr Varadkar said Fine Gael was acutely aware of the importance of agriculture to rural Ireland and he was willing to fight hard at EU level to oppose any cuts in farm supports in any reform of the CAP.

“It’s going to be a real battle – a lot of other countries in the European Union want to reduce the budget for CAP and put into other areas that they consider to be more important.

“It’s going to be quite a battle to maintain the CAP budget but I am up for that battle – I’ve learned a lot from the Brexit negotiations and I have a good team behind me including people like Phil Hogan, Simon Coveney, Helen McEntee.”

Mr Varadkar said he had also developed many contacts in the European Union over his involvement in Brexit talks and he would seek to use that “political capital” to fight for maintaining the CAP budget.

However he said that in the event there was a move to reduce EU spending on the CAP, then Fine Gael in government would be willing to draw on national funds to make up the shortfall and ensure Irish farming remains viable.

“Yes, we are willing to use national funding to top up the CAP funding if needs be to ensure we protect farm incomes and the rural economy but the priority has to be to make sure we get as big a slice of the CAP budget as possible.

“And I honestly believe that me as Taoiseach and the people I have behind me are the best people to fight for farmers and fight for rural Ireland in those negotiations around the European table.”

He said that if re-elected taoiseach, he would, in addition to making the case for Irish agriculture in CAP budget negotiations, work hard to secure a good trade deal for Irish farmers in any trade deal with the UK.

He said he would press hard to ensure any trade deal the EU negotiates with the UK post-Brexit would give Irish farmers “tariff-free, tax-free, quota-free access to the UK market which is so important for Irish agriculture.

“We need that tariff-free, tax-free, quota-free trade deal negotiated through the European Union because so much of our exports go to the UK, particularly beef, cheese and mushrooms which are dependent on the UK market.”

Mr Varadkar pledged he would also make the case for Irish farmers that, in any future EU deal with other blocs such as the Mercosaur countries, they are not disadvantaged by stronger EU commitments to protecting the environment.

“We recognise the role family farming plays across rural Ireland, in every parish, in every town and every constituency across the country, different types of farming, different sizes of farm, different income levels,” Mr Coveney said.

Mr Coveney said he had impressed upon EU Brexit chief negotiator Michel Barnier on Monday how important both farming and fishing were to Ireland in terms of its trade relationship with the UK.

Mr Coveney said it was imperative Ireland, through the EU, achieved a seamless trade deal with the UK that doesn’t have any tariffs or quotas attached and Fine Gael was best placed to achieve that goal.

“Farming will always be a priority for Fine Gael, we are steeped in it and we always will be and if you are a farm family worried about the future of beef prices or dairy expansion or the transition, we are the party to work with,” he said.