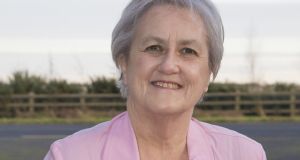 Former RTÉ journalist Valerie Cox announced her decision to run just a day before the close of nominations at noon on Wednesday.

Former RTÉ broadcaster Valerie Cox is to run for the Dáil in the Wicklow constituency as an Independent, campaigning for older people.

In a surprise move Ms Cox, a well-known journalist and author, announced her decision to run just a day before the close of nominations at noon on Wednesday.

Ms Cox’s candidacy will shake up the campaign in the five-seat constituency and intensify the debate around the State pension age increase from 65 to 66 currently.

She won a discrimination case against RTÉ which was ordered by the Workplace Relations Commission (WRC) in March 2018 to pay her €50,000.

Ms Cox had worked for the station for over 20 years before her retirement and the WRC found she had been discriminated against on age grounds when her contract was not renewed after she turned 65.

She is known across Co Wicklow for her work over 40 years as a journalist for the Wicklow People, as news editor for East Coast FM radio and RTÉ and is a patron of Wicklow Hospice Foundation. The hospice formally opens on Friday.

Speaking about the decision to run, Ms Cox (68) said she made up her mind a few days ago after consulting family and a few close friends.

The Arklow-based candidate was motivated in part by the State pension age debate and by her disgust over the prevailing view of ageing. She claimed that once someone reaches 65 “the view seems to be ‘please crawl into the corner there and die quietly’”.

Personal experience has shaped her views. When her husband Brian contracted herpes encephalitis, a condition just four in a million people develop, he was in a coma for three months and paralysed.

She resisted several attempts to have him moved into a nursing home after she was told his recovery had “peaked” while he still needed help to do everything.

Ms Cox said once a person turned 65 they were no longer eligible for treatment at the National Rehabilitation Centre in Dun Laoghaire, adding that the solution seemed to be “stick them in a nursing home”.

Her husband was treated in a facility in Leopardstown and has since recovered.

Ms Cox works part-time for Sage Advocacy, a national rescue service for older, vulnerable people whose activities include getting people out of nursing homes.

The intensifying debate over the increase in the State pension eligibility age also helped her decide.

She said people should have the choice to retire and receive full pension entitlements or continue to work. Signing on was very demeaning, “particularly for men” and many would receive €70 less a week than with the State pension.

The new Wicklow candidate is also the author of a number of books including one on missing people called Search; a book on the family law courts, which she reported on for RTÉ; a history of the charity Alone; a history of the National Ploughing championships; and Growing Up with Ireland, interviews with people born into the newly established Irish State in 1922.

She has continued to work as a journalist, most recently standing in as presenter on the morning show on East Coast FM.