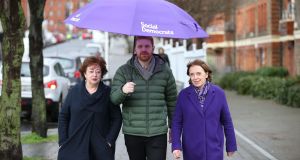 A nationwide rent freeze, a constitutional right to housing and building more than 100,000 homes over the next five years are some of the housing policies put forward by the Social Democrats.

The party also wants legislation to stop land hoarding and the elimination of tax breaks for real estate investment trusts or “cuckoo” funds.

The party wants to introduce legislation to reserve 20 per cent of housing in private developments for affordable housing to buy or rent, in addition to the current 10 per cent for social housing.

The manifesto also sets out re-establishing the Land Development Agency (LDA) with a new Land Commission “with teeth and targets” and specific measures to support housing for older people.

The party said it would “radically scale up” the number of houses being built by the State on public lands to an average of 20,000 units a year and 100,000 over the lifetime of the next Dáil. The Social Democrats said its priorities also include eradicating homelessness and measures to protect renters.

The party is running 20 candidates in the general election next month and hopes to win between five and eight seats.

Party co-leaders Róisín Shortall and Catherine Murphy previously said they would not rule out working with any party after the vote so long as they are able to influence the direction of government.

Ms Murphy said there is “a failed political ideology” at the heart of the former Government’s approach to housing, which relies on the market to deliver housing that is “so urgently needed”.

“This Fine Gael government did not want the State to compete with private developers and so in a blatant disregard of one of their primary responsibilities as a government, has consigned thousands of people to the highest rents ever, homes that are just unaffordable to buy and over 10,000 people to homelessness,” the Kildare TD said.

“Our policies launched today aim to radically shift the balance back to the State as a key provider of housing that is affordable to buy or rent and of social housing.”

Social Democrats councillor Carly Bailey, a candidate in Dublin South West, said the level of homelessness is “one of the most disgraceful legacies of this Fine Gael government, supported by Fianna Fáil”.

“We believe that the homelessness crisis is entirely predictable, following government policies,” the Rathfarnam-Templeogue councillor said.

“The next Dáil can eradicate homelessness by following a ‘Housing First’ model and by building the social and affordable housing that is needed. It just needs political will and courage.”