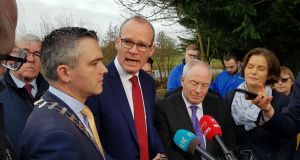 Mr Coveney challenged Mr Martin to say what exactly he would do to ensure the 1.1 million people in rural Ireland awaiting high speed broadband are connected as envisaged under the National Broadband Scheme.

“Micheál Martin has repeatedly said he won’t sign up to the National Broadband Scheme and I think the question for him today is – ‘What has he to say to the 1.1 million people across the country, who don’t have broadband?’ ”

Speaking in Golden in Co Tipperary Mr Coveney said that figure of 1.1 million nationally included 33,000 premises in Tipperary without broadband.

Mr Coveney and Minister for Rural and Community Development Michael Ring were launching Fine Gael’s policy on rural Ireland while also canvassing with the party’s two candidates who are bidding to win seats in Tipperary, Garret Ahearn and Mary Newman.

Mr Coveney said that the 33,000 people in Tipperary awaiting broadband have a clear commitment from Fine Gael, who have pledged €118 million to connect every one of them in Tipperary as part of the National Broadband Scheme.

“What I would like to hear from Micheál Martin is - what is his solution to broadband for those 33,000 people in Tipperary and 1. 1million nationally waiting for it because I don’t believe he has one.

“And I believe he will end up supporting the national broadband strategy that he has tried to undermine in a populist way over the last six months and this is a consistent message from Fianna Fail,” he said.

Mr Coveney said Fianna Fail under Mr Martin’s leadership had also adopted a populist position in relation to rent freezes, supporting a vote for it in the Dáil only to let if fade away when they discovered it was unconstitutional

“Is this the party you trust to take this country forward, to solve a housing crisis, to invest in rural Ireland, to link every premises in the country to high speed broadband – I don’t think so?

“The people of rural Ireland are entitled to broadband. I am sick and tired of the hypocrisy of rural Fianna Fáil TDs, saying one thing in Dublin, agreeing with Micheál Martin and saying something else in rural Ireland.

“We are committed to rolling out high speed broadband in rural Ireland – the people of rural Ireland want it – are Fianna Fáil committed to providing it? They need to let us know if we are going to have it if they are in government.”