Strict rules on queuing as Dublin shops prepare to reopen 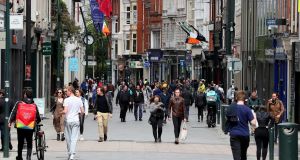 Dublin city shops will have to enforce a strict on-street queuing regime if they are to reopen their doors on Monday.

Shop owners must ensure customers do not queue past the length of their shop front, and will be required to “take measures to prevent members of the public joining the queue” if it breaches this length, under strict protocols issued by Dublin City Council.

The council’s Covid-19 queuing rules are designed to prevent overcrowding on the city’s shopping streets, particularly pedestrianised areas such as Henry Street and Grafton Street, and the small streets that surround them, where shops are densely positioned.

However, the rules, coupled with two-metre distancing requirements, would mean that most shops could not have more than two or three customers waiting outside.

Queues will be required to run along the shop front, and not perpendicular to it, as would be typically seen with cash machine queues on Grafton Street and Henry Street.

The queue must not extend beyond the length of the shopfront, but also must not begin immediately at the entrance door or run in front of a fire escape.

Queues to different premises must not overlap, but physical barriers must not be used to control or manage queues.

The council will be placing “queueing icons” on the ground in the main pedestrianised streets in the city centre and O’Connell Street, but retailers can also mark the footpath with removable stickers to indicate the direction of the queue and appropriate spacing.

The onus has been put on shops to ensure the queueing rules are adhered to, with the guidelines stating that “care should be taken by the retailer to ensure that appropriate social distancing is being observed” and that pavements are not blocked, particularly for those with visual or mobility impairments.

The protocols also state: “Where the available pavement space is insufficient to accommodate queuing demand, the retailer must take measures to prevent members of the public joining the queue.”

The council advises that retailers should consider operating on an “appointment-only basis” if possible.

I think a lot of retailers will use an online booking system, or will take customers numbers and call them

Despite the onerous responsibilities placed on retailers, business groups have largely welcomed the council’s guidelines.

Graeme McQueen of Dublin Chamber of Commerce said they were “a useful starting point for firms as they ramp up their reopening plans” and said the chamber would be meeting with council chief executive Owen Keegan in the coming days to “further the dialogue” between businesses and the council. “By working together, and with a common sense approach, a successful reopening of Dublin can happen that works for all parties. Dublin Chamber is liaising with members currently regarding their reopening plans and feeding any issues back to Dublin City Council and the other local authorities in Dublin.”

“Retailers and local authorities need to work together to determine how to manage this process and I would welcome this guidance from the council.”

Many shops, particularly smaller retailers, were likely to focus on an appointment-only system for their initial reopening, she said.

“We would be very aware that in Dublin city the retail spaces can be quite small and queuing, particularly with the guidelines in mind, would be almost impossible. So I think a lot of retailers will use an online booking system, or if queues do form, will take customers numbers and call them or use an automated text system to tell them when there is space to come back.”

The reopening of shops would be “a learning process”, she said, and shops were already learning from their neighbours such as pharmacies and supermarkets which had remained open.

Business organisation Dublin Town said it had circulated the queuing protocols to its members and believed they represented a “sensible, balanced approach”.