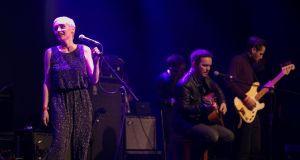 Niamh Farrell (left) and Brian Darcy of HamsandwicH perform at the Choice Music Prize live event at Vicar Street on March 3rd 2016 in Dublin. HamsandwicH are one of 16 acts to feature on the charity single. Photograph: Kieran Frost/Redferns

A who’s who of Irish musicians are coming together help raise funds to purchase personal protective equipment for charity-run nursing homes with a cover recorded over Zoom.

The group includes the likes of The Riptide Movement, Jerry Fish, The Frank & Walters, John Spillane and HamsandwicH.

Aiden O’Connor, owner of Mike the Pies venue in Listowel, and Paul Linehan of The Frank & Walters are the driving force behind the cover of Bill Withers’ Lean on Me. Over a dozen Irish artists will be heard singing on the track, which is due to be released on Monday, June 8th; it will be available to purchase online.

“When I heard that a local nursing home Aras Mhuire weren’t receiving any PPE because they’re a charity I thought I might be able to do something through music,” said O’Connor.

“I started texting around and got a great response. Paul Linehan was one of the first to respond but he made it more professional. A month later we have the finished product, with 15 bands/artists involved. Paul put the track together, mixed by Ber Quinn, mastered by Richard Dowling. ”

Linehan explained the complexities of recording a song with multiple vocal tracks remotely: “This was all done by remote recording and we didn’t see each other for the whole time. When the backing track was in a rough stage I sent it to each artist to sing it and to send me a dry vocal. Most artists sang the whole song, I then put what I thought were their best parts on the song. It was like a jigsaw puzzle, but I did my best to make it sound as if we were all singing in the same room, coming from the same direction.”

Hamilton the movie soars above its stage-bound origins
9

The books quiz: Who was the alcoholic priest in Strumpet City?
Real news has value SUBSCRIBE