Student graduations may be disrupted due to industrial action 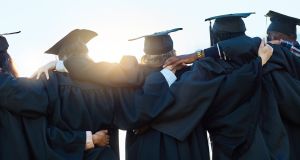 Graduation ceremonies for thousands of students could face disruption as a result of industrial action being taken by staff in institutes of technology across the country.

Library, clerical and administrative staff at the State’s 14 institutes of technology have not been engaging in any form of communication including making and taking phone calls, video conferencing or responding to emails since last week.

Trade union Fórsa,which represents the staff concerned, said the move formed part of a campaign aimed at securing a comprehensive job evaluation exercise. Such an initiative could lead to staff receiving higher pay.

Academics said they were concerned at difficulties organising graduation ceremonies for thousands of students, which are set to begin shortly.

The union said the industrial action, which started last Monday, followed more than three years of efforts to ensure the implementation of a commitment agreed in May 2015, as part of the negotiations that led to the Lansdowne Road agreement, in relation to job evaluation for library, clerical, administrative and support grades.

Talks between the union and management aimed at resolving the dispute took place at the Workplace Relations Commission last week. But they adjourned after a few hours.

A Fórsa spokesman said no date had been set for further talks and in the meantime the industrial action continued.

The Department of Education said the current public service agreement precluded industrial action in relation to matters which are covered by it.

The department said it had highlighted this position to the union at the talks last week at the Workplace Relations Commission.

While the action is phased, it will inevitably have impact on the service that we can provide to students

However, it is understood Fórsa believes the department is not acting in accord with the provisions of the agreement. A department spokeswoman said it had sought a suspension of the industrial action and to have the matter referred to the central group which oversees the public service accord. This comprises trade union leaders and officials of the Department of Public Expenditure and is chaired by the commission.

The spokeswoman said the department regretted any industrial action which affects services for students.

Separately, the Technological Higher Education Association, the umbrella body for the sector, also expressed “regret” at the action by Fórsa members.

“While the action is phased, it will inevitably have impact on the service that we can provide to students,” said association chief executive Dr Joseph Ryan. “For this reason, we encourage the parties to utilise the formal mechanisms available to settle this matter as quickly as possible.”

Earlier this month, trade union Siptu said it had served formal notice on the Health Service Executive that it will be seeking pay rises for healthcare assistants and other service support staff on foot of a job evaluation review.

Siptu said the review had indicated that healthcare assistants and some other grades are entitled to an upgrade on the basis that roles and responsibilities had changed.