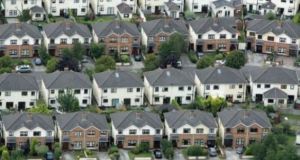 Since 2013, a total of 5,200 new and unused properties were exempted with €10 million in tax forgone

A tax relief that has seen almost 17,000 homes exempted from property tax since 2013 has cost the State about €35 million in potential income.

The relief, which was granted to owners of new and unused homes bought from a builder or developer from January 1st, 2013 onwards, continues until October 31st next year.

To be eligible for the tax exemption, the properties had to be used as principal private residences.

In 2013, when the relief was introduced, exemptions were applied to 11,700 properties bought or built in that year, with a property tax value of €25 million, according to figures from the Revenue Commissioners released by Minister for Finance Paschal Donohoe.

A total of 5,200 new and unused properties were exempted from 2014 onwards, with €10 million in tax forgone.

In the first six months of this year, Revenue collected €298 million in property tax, including €1 million in arrears for the household charge, the precursor to the tax.

Almost €71 million in total has been collected in household charge arrears.

A major review of the property tax is currently under way by a cross-departmental group.

Social Democrats TD Catherine Murphy said that while homeowners would be most concerned about the revaluation, there had been assurances from the Government that the tax rate would be cut to prevent steep increases in bills.

Anyone who bought a house from 2013 onwards will be making their first payment at the end of next year, said Ms Murphy, who sought the information in a parliamentary question.

But she said there was more at play than individual property tax, including a review of the amount of tax local authorities could retain once this 2013 to 2019 valuation period ends.

The tax did not take account of population growth and since 2000 there had been “whole new areas” that had grown up mainly on the edges of cities such as Dublin, Cork and Galway.

She said local authorities would have been stretched to fund services for these new growth areas because they were not considered for property tax purposes.

They are, however, expected to gain from the revaluation of property tax in the review.

But a number of local authorities, particularly those in rural areas which would not have seen population growth, are expected to be among the losers when the property tax gets divided up. These are likely to include Mayo, Tipperary and Donegal.

“They will need State funding to ease the burdens they face, such as staff costs,” Ms Murphy said.

The current base rate for property tax is 0.18 per cent of a home’s value, but valuations have not been updated since the tax was introduced in 2013, when property prices were much lower.