Stowaways at Cherbourg: ‘All day they play cat and mouse’

Jack Power reports from the French port of Cherbourg where authorities are trying to deal with the increasing problem of stowaways trying to make their way to Ireland and the UK. Video: Jack Power 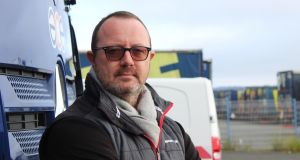 Stéphane Coispel, manager of French transport firm AllianCeuropE, at Cherbourg port: “It is very expensive for us, you have damage to trailers and we must repair them.” Photograph: Jack Power

Stéphane Coispel is sitting in his car beside the barbed-wire fence enclosing Cherbourg port, one of several points of crossing that for migrants in Europe offers a chance to stow away into Britain.

Coispel (48) manages a fleet of more than 40 haulier drivers for French transport company AllianCeuropE which ships goods between France and Ireland. At least once or twice a week, one of his drivers reports attempts by migrants caught trying to break into one of their lorries headed to the French port destined for Ireland.

Alongside the checks carried out by customs authorities, Coispel – who has worked at the port for 15 years – inspects his company’s trailers before they are loaded onto ferries, including searches for stowaways.

Illegal UK-bound immigration is nothing new, but the deaths of 39 Vietnamese nationals found in the trailer of a refrigerated lorry in Essex last October has brought a renewed spotlight.

Last week, 16 Kurdish migrants from Iraq and Iran were discovered in the back of a truck on a Rosslare-bound Stena ferry, though they wanted to go to the UK. Most have since quit their Irish accommodation and headed for the UK.

Gardaí are not treating the truck driver as a suspect and believe the men entered his lorry while he was stopped on approach to the French port.

In Cherbourg port, two tall barbed-wire fences surround the large bay where UK- or Ireland-bound trailers are kept. More barbed wire fills the gap between the two fences. Lorries are triple-checked before boarding, beginning with a check of a drivers’ credentials.

Soon after, a more robust screening by customs officials and French police takes place, before a third check just ahead of loading, where trailers are often opened, and sniffer dogs go to work.

“All the day they play cat and the mouse, the cat is the security and the mouse is the migrant,” Coispel tells The Irish Times.

Migrants try to board trailers on the roads heading to the port, often launching attempts hundreds of kilometres back while drivers stop for mandated breaks. Or they will make attempts as the trucks ready to load, by cutting through the wire fence, or using a ladder to leap over it, Coispel says.

“We have a very great security service on the port, [but] migrants are more numerous and numerous and difficult to control” he says.

Migrants target curtain-side trailers, running a knife through the roof or side of the curtain and slipping inside. With metal container trailers, they will try to break the lock and seals on the back door, with an accomplice trying to mask the break-in afterwards.

Some have used heavy-duty tools to cut slim holes in containers’ roofs, before dropping down inside. Sometimes, entire back doors are lifted off hinges, which avoids breaking metal seals and locks.

“It is very expensive for us, you have damage to trailers and we must repair them,” says Coispel, adding that AllianCeuropE and its Wexford partner, Perennial Freight, face significant bills each year because of damage.

“You have expensive cost of insurance, because if your freight is damaged inside you must pay. Insurance accept to pay one time, two time perhaps, but after they say, ‘sorry, but we can’t pay each time you have damage for that’,” he says.

Refrigerated trailers are “a real difficulty”, he says.

“We check the trailers, but it’s complicated to open the fridge,” as some clients ordering goods which must be kept below freezing temperatures want the trailer to remain sealed until delivery, he says.

Despite recent coverage, illegals try to board refrigerated trailers only in “exceptional” circumstances, he says.

To avoid break-in while they sleep, most lorry drivers now avoid stopping within 200 kilometres of any French port, even to take a short nap or leave their lorry for a coffee break. In some cases, trees have been used to block roads to get them to stop.

Ionut Mirescu (36) is a Romanian lorry driver who works for Co Wexford firm O’Brien Transport. Three years ago, more than a dozen people stood in the road as he drove to Calais, before threatening him and demanding to be let into the back of his truck.

“They stay like this [arms crossed] in the middle of the road, not one, but 10, 15, 20 and you must stop,” he says, speaking to The Irish Times while on a lay-over in Cherbourg port.

He opened the container door and let the men into the trailer. “You can do nothing in that moment. I drove to the port and to the police,” he says, warning the authorities the first chance he got.

Out of more than a dozen lorry drivers The Irish Times spoke to during a 17-hour Stena ferry sailing from Rosslare to Cherbourg, and at the port itself, nearly all have had an experience of migrants’ break-ins.

European Union regulations dictate driving times and rest-breaks. However, drivers heading for French ports and onto Ireland or Britain fear break-ins at every turn. Filling stations are particular targets.

“You don’t stop because you are afraid,” says one driver who only gave his name as John. “When drivers pull in for mandated rest, most no longer leave their cabs. “On that 45 minutes you don’t sleep, you don’t do nothing, you are security in that moment,” he says.

“Now it is a problem in all of France, it doesn’t matter where you are stopping, they look for the Irish trucks,” he says. “I am not security, but I must check [in the trailer] every time … In the UK if they stop me and find some migrants I take a penalty, it’s not fair.”

In Britain, the driver and the haulier company can be fined up to £2,000 (E2,335) per migrant, regardless of whether the driver knew they were there. In Ireland, legislation focuses on those who actively collude in people-smuggling.

Now, drivers have tricks to spot illegal entries, tying cable ties around handles. They can be easily cut, but their absence is a tell-tale sign. However, drivers are not safe even when they are inside Cherbourg port.

Some weeks ago, five migrants broke into a container while a truck was sitting in the port overnight, said one driver, speaking anonymously. Security cameras spotted the break-in, and the illegals were arrested.

Desperate for a new life, some migrants spend months in Cherbourg studying the habits of those who use the port. Sometimes, they make mistakes, breaking into trucks that are heading back into Continental Europe.

“(It) is a human drama when you have children migrants in the trailer, what are you to say, what can I say when there is a baby, or a wife … It is difficult, because it is a human like me. These people are not aggressive,” he says.

Johan Ruiter (53) is originally from the Netherlands and has been driving trucks for three decades. He is currently working for Newry-based firm Trainor Transport.

On Saturday, he was travelling to Cherbourg on the Stena ferry to deliver a livestock shipment to Italy, before taking a shipment of tiles back to Ireland.

Cattle lorries are particularly difficult to break into, but that does not deter attempts. Last year, migrants tried to break in as he was travelling to Dunkirk after he had stopped behind two other trucks.

“Behind my lorry there were seven or nine migrants trying to get in the back door. I walk outside and I open the belly box of the cattle trailer and I take my fork, and you know, you scare them away,” he says.

“I have a cattle lorry so I have to muck it out so I have this fork, so you come out with the fork and come running, and they fly away,” he says.

“I have seen knives to cut curtains on side of trailers. Even on a box trailer they will break the locks, or they will even use grinders and they cut a hole in the roof and they go inside, and the locks on the rear doors are all fine,” Ruiter says.

He is critical of the fact that drivers can be penalised for driving for too many hours, when they get so little protection when they stop up overnight close to ports.

“I will stop for a coffee for a half-an-hour break. I stay close to my lorry and take my coffee in the cab,” Ruiter says.

Nic Sterian (38) is a Romanian lorry driver working for Wexford firm P&D Foley Transport, and has lived in Ireland since 2014.

On Sunday afternoon, he was waiting in Cherbourg to deliver metal bars to Bologna, Italy, with a return to Ireland due on Friday.

“If you stop 100km from any port in France it’s a problem with the migrants … If migrants get inside they ruin your goods, they pee inside, they damage it, ” he says.

Still, Cherbourg is one of the better French ports for truckers. Calais, Dieppe and Le Havre are worse, says Sterian, who tells of a break-in when he was about 200km from Calais.

“They tried to open the back doors but I had a lock, and I had to start driving and go, I was in my break,” he says.

He risked getting hit with a penalty for driving during his mandated break, but said to keep himself and his truck safe he had no choice.

By 8:30am on Monday morning, trucks file off the Stena ferry from Cherbourg at Rosslare, facing inspection by gardaí and customs officers, where the trailers are opened, and officials climb up ladders to peer down into the load.

A lone armed garda watches on, as a customs sniffer dog is brought along the line of trucks.

One by one the lorries clear checks and drive on. Another journey nearly done.