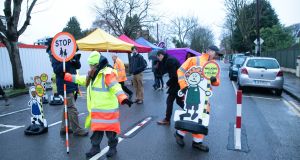 Parents of school children at two schools in Malahide, north Dublin, have been banned from driving close to the school gates for the drop – and they are delighted.

On Monday morning children heading for St Oliver Plunkett’s school on Grove Road arrived on foot, scooters and bikes, or in “walking buses” – larger groups of students supervised by an adult – from one of three nearby town car parks, or hand delivered by parents parked in the same car parks.

To provide parents with an incentive not to drive up to the schools, vouchers for a couple of hours free morning parking are being made available for the parents by Fingal County Council.

The council hopes the free parking will also encourage some parents to spend time in Malahide town after the school run.

Every school day morning from 8.30am to 9.15am and from 1pm to 2.45pm a section of Grove Road outside St Oliver Plunkett’s School in Malahide is closed to traffic.

Metal fingerposts and child-sized images of smiling schoolchildren are used by traffic wardens to prevent vehicles from accessing the school.

As an alternative parents can either drive to one of three “Park and Stride” local car parks and then walk to school or use “stop and drop” points for their children at the edge of the car-free zone, several hundred metres from the schools.

The “walking buses” are being offered as an option for time-pressed parents who may not have time to walk their children the extra distance to school.

Niamh Russell of Fingal County Council said this plan would reduce congestion around the schools generally as parents would not be meeting teachers or chatting with other parents while their cars block the roads.

When The Irish Times visited Malahide on Monday to view the project no parents spoke against the scheme.

The children made full use of the car-free zone outside school, using coloured chalks, footballs and holla hoops to make the space their own. Even Dean Rock turned up with the Sam Maguire to celebrate the official launch of what is Ireland’s first “School Streets” project.

“If they know they can’t, they won’t” he said of the parents. He said roads around the school gates would be safer, “with better air for young lungs”.

Mr Nolan said current figures showed that 79 per cent of children who live within one kilometre of their schools were driven to school each day.

The School Streets project does not block traffic from the Church Road in front of St Andrew’s Primary School, because Church Road is a main thoroughfare, but parents are discouraged from coming to the school gates and instead are being urged to stop and drop at the car park sites from where their child can join a walking bus.