Regulations on takeaway use should be relaxed for Covid-19, industry body argues 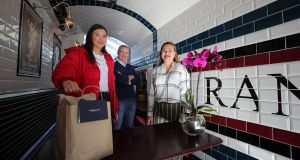 Emma Geoghegan, Conor Sexton and Jutarat R Suwankeeree at the Nightmarket restaurant in Ranelagh in Dublin, which is providing a takeaway service. Photograph: Nick Bradshaw

Restaurants must be given a dispensation from planning regulations to allow them operate as takeaway services during the coronavirus crisis, the Restaurants Association of Ireland has said.

Under planning law, a traditional sit-in restaurant must get planning permission to change to being a takeaway. Several local authorities apply additional stringent requirements on the location of takeaways and their hours of operation, over and above national regulations.

However, restaurants association chief executive Adrian Cummins says these regulations need to be waived to allow restaurants to continue trading and providing a service in the current circumstances.

“They have already done this is in the UK, so any restaurant that wants to operate as a takeaway can do so because of the emergency situation, and we must follow suit here.”

The measure could be immediately implemented on a short-term basis he said. “This dispensation should be in place for three months or until the Government and the Department of Health say the crisis is over.”

Mr Cummins has in recent days called for the Government to order the closure of all restaurants, but, he said, that was due to the safety concerns of operating with customers on site.

“It is too difficult to operate the social isolation measures in a restaurant, but it is far easier to operate as a takeaway, which would have very few staff as well as no on-site customers.”

Currently, Mr Cummins said, he was not aware of any local authority taking enforcement action against a restaurant for operating as a takeaway, but he said, there may be calls for them to do so in the coming weeks, particularly from existing takeaways.

“I would ask that local authorities would take a common-sense approach to this, but I am also calling for the Government to waive the planning regulations for three months so restaurant owners can have peace of mind.”

A grey area in the planning regulations has already emerged where restaurants, which would traditionally only operate as sit-down venues, have in recent years provided take-out services through separate delivery companies.

This is described as an “ancillary” use in that it is not the main activity of the business. “The way people use restaurants has perhaps evolved beyond the definitions in the regulations of ‘restaurant’ or ‘takeaway’,” a planner working in the private sector said. “I have yet to see anyone take a legal challenge to this type of delivery service.”

However, he said a difficulty might arise where the delivery or takeaway moves beyond the ancillary use, to the main or sole use of the restaurant.

“If the takeaway becomes the primary use it could constitute a material change of use, triggering a requirement to obtain planning permission. But it’s a difficult one to prove for planning enforcement.”

Separate regulation was brought in for takeaways primarily because of the nuisance factor these businesses can represent, with patrons often eating as soon as they leave, dropping litter, or congregating around the premises and causing disturbance to surrounding properties.

Take-out from a traditional restaurant, where people would be likely to consume the food in their own homes, was not the consideration at the time, he said, “but habits have changed”.

Another senior planner working in the State sector said local authorities would need to assess if the restaurant was operating as it normally would, with the only difference being that the consumption was taking place off the premises.

“There are special circumstances here,” he said. “A pragmatic response would be that as long as the restaurant’s main business, but for Covid 19, is the sit-down model – ie it isn’t a takeaway in the conventional sense and is merely providing their normal food service for collection instead – and bearing in mind the temporary context – that planning permission isn’t required.”

However, he said, the activities of the restaurant, if done without planning permission, could be open to challenge. “It is a matter for An Bord Pleanála and the courts to ultimately decide.”

Dublin City Council is taking this pragmatic view.“From a planning perspective a short-term use as takeaway, or an ancillary and subsidiary use to a restaurant, would not require planning permission, unless a specific planning condition is in place,” city planner John O’Hara said. “Each case depends on its particular circumstances. It may be that a short-term takeaway in this crisis has less public-health risk than sitting in a restaurant.”

Waterford City and County Council also makes the point there may have been conditions with a restaurant’s planning permission specifically prohibiting takeaway use. “However, in general terms, there is no issue in principle with a traditional restaurant operating a delivery business or providing an ancillary takeaway service.

“As is the case with every other local authority, each instance of takeaway use would need to be assessed on a case-by-case basis to determine whether or not an unauthorised change of use has occurred and what enforcement action would be most appropriate.”

“There is no planning exemption for a takeaway food service from a restaurant and such a use would require the benefit of a planning permission. Allegations of unauthorised development which are received in writing by the planning authority will be investigated.”

Galway City Council said planning permission remained a requirement for a takeaway service. “To date we are unaware of any recent dispensation from Government in the current climate. However, the situation at the moment in relation to local business particularly in the hospitality sector has been a very recent shock to the system. We will review the situation on the ground as it develops.”

Access to mortgage-to-rent scheme may be widened 02:23
Irish-based scientists find new link between delirium and brain energy disruption 02:00
Chilean student ‘happy to be free’ after being detained for nearly two weeks in Mountjoy 00:05
Stardust campaigner and ‘true warrior’ Christine Keegan dies 23:58
Barry Cowen sacking ‘not good news for the Government early on’ - Coveney 22:57