Coronavirus: NI schools to be repurposed as care centres for children of key workers

UK’s cafes, pubs, bars and restaurants to close after announcement by Boris Johnson 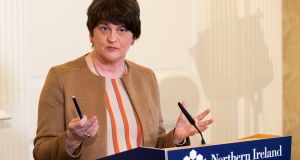 Schools in Northern Ireland are to be repurposed as facilities to care for the children of key workers during the coronvirus outbreak.

First Minister Arlene Foster said on Friday evening that “the educational work that goes on in schools has come to an end” but schools were “a good place to provide that free childcare for those workers … to allow the National Health Service to be in a fit purpose to serve us”.

The Department of Education was due to publish guidance for schools after principals had called for clarity as to how this would work.

Key workers include those employed in health and social care and other frontline positions, as well as roles essential to public life or to the provision of essential goods and services.

Employees in Northern Ireland who have been laid off because of coronavirus will benefit from a commitment by the UK government to pay 80 per cent of wages for employees not working, up to £2,500 per month.

All cafes, pubs, bars and restaurants in the North will also close following an announcement by UK prime minister Boris Johnson, though many such premises have already shut down voluntarily.

Nine new cases of coronavirus, also known as Covid-19, were identified in the North on Friday, bringing the number of confirmed cases to 86. One person has died as a result of the pandemic.

The true number of cases is likely to be significantly greater, given people with mild symptoms - defined as a new persistent cough and/or fever - have been told to stay at home and self-isolate.

They are not being tested and are not included in the testing totals. A total of 1,816 tests have been carried out in Northern Ireland, and measures are being put in place to increase testing capacity.

Meanwhile, the Police Federation has called for officers in Northern Ireland to be tested for Covid-19 amid fears the spread of the virus could result in a “skeleton” workforce.

The representative body for Police Service of Northern Ireland (PSNI) officers has also called for personal protection equipment to be made available for officers.

Assistant Chief Constable Alan Todd said work was underway to ensure officers were protected and to make sure they could maintain staffing levels.

Public transport services in Northern Ireland are to be reduced in response to the coronavirus outbreak.

From Monday, bus and rail routes will operate on a Saturday timetable, and Translink will also reduce the timetable for cross-border coach and Enterprise rail services.

1 Bobby Storey: The IRA's planner and enforcer who stayed in the shadows
2 Transgender Cork farmer (65) surprised at positive response to telling her story
3 Q&A: How close are we to having a Covid-19 vaccine?
4 The abrupt end to Brexit talks is not only surprising but perplexing
5 Is Donald Trump losing his touch?
Real news has value SUBSCRIBE