Tadhg and Diarmuid O’Sullivan to be buried on Friday, service for Mark O’Sullivan on Saturday 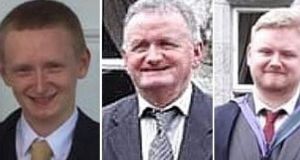 Diarmaid O’Sullivan (23, left), his father Tadhg O’Sullivan (59) and another son, Mark (26, right) died at the family farm on Monday. Their funerals will be held over the coming days.

The three members of a family who died in a murder-suicide shooting at their family home near Kanturk in north Cork are to be buried in two separate funerals over the coming days.

Tadhg O’Sullivan (59) and his two sons, Mark (26) and Diarmuid (23) died on Monday in what gardaí described as “a terrible family tragedy” which has shocked the local community of Castlemagner, near Kanturk.

Gardaí believe Mark O’Sullivan was shot dead in his bed in the family home by either Diarmuid O’Sullivan or his father or both, apparently as part of a dispute over a will.

The two men then went to a field some distance from the house where they appear to have taken their own lives.

Tadhg and Diarmuid O’Sullivan will be buried following a private funeral Mass for family members at St Mary’s Church in Castlemagner at 2.30pm on Friday with burial afterwards at St Brigid’s Cemetery in Castlemagner.

Mark O’Sullivan will buried following a private funeral Mass for family members which will take place at the Church of the Immaculate Conception in Kanturk at 3.30pm on Saturday, with burial taking place afterwards at an undisclosed location.

The funerals are taking place in accordance with current HSE and government guidelines on Covid 19.

Mark O’Sullivan’s funeral will be livestreamed.

There are no live-streaming facilities at St Mary’s Church in Castlemagner but it is expected members of the local community will pay their respects to Tadhg and Diarmuid O’Sullivan by lining the streets of the village.

Local parish priest, Canon Toby Bluitt said people in the parishes of Kanturk and Castlemagner offered their deepest sympathies to Ms O’Sullivan “on the tragic loss of her husband, Tadhg and sons, Mark and Diarmuid.”

In a notice posted on the parish Facebook page, Canon Bluitt said: “All of us are in deep shock and numbed by this heart-breaking news. We pray the Lord’s consolation for Ann and her family and pray for God’s mercy for Tadhg, Diarmuid and Mark. May they rest in peace.”

The Garda investigations into the three killings are continuing. Garda technical experts are still carrying out an examination of the family farm at Assolas between Kanturk and Castlemagner which remains declared a crime scene.

It is understood Garda technical experts found correspondence from solicitors in the house which confirms reports that there was a dispute between Mark on one side and Mr O’Sullivan and Diarmuid over a proposed will regarding the 115 acre holding.

If you are affected by any of these issues, please contact Pieta House on 1800-247247 or the Samaritans by telephoning 116123 for free, or by emailing jo@samaritans.ie.

Ms O’Sullivan returned to the family home on Sunday evening with Mark after staying with relatives locally in Castlemagner for a fortnight following her discharge from hospital in Dublin following surgery for a serious medical condition.