‘There is a lot of emotion, it’s just very sad,’ says resident as gardaí investigate tragedy 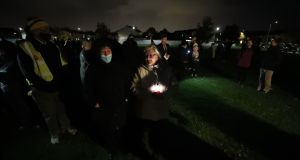 Residents of the Llewellyn estate in Ballinteer hold a candlelit vigil on Wednesday night after the bodies of Seema Banu (37) and her children Affira (11) and Fazan (6) were discovered in their home on the estate. Photograph: Nick Bradshaw

It was pitch dark and biting cold on the Llewellyn estate in Ballinteer, south Dublin on Wednesday night as people approached from all directions for a vigil. It marked the end a shocking day when the bodies of two young children and their mother were found in a house on the estate.

Seema Banu, a 37-year-old married mother of two from India, had settled in Ireland over a decade ago and over the past year had moved into a semi-detached house on Llewellyn Court.

Her daughter Affira (11) and her six-year-old son Fazan lived with her and had been on their mid-term Halloween break from Ballinteer Educate Together School. But early on Wednesday afternoon gardaí came to their home in response to concerns for their welfare expressed by neighbours.

And when the gardaí explored the house they found the remains of all three upstairs, the children strangled and their mother also dead, though a postmortem was awaited before the cause of her death could be confirmed.

All day Wednesday detectives were seen coming and going from the house, as well as a pathologist and members of the Garda Technical Bureau.

At times the scene around the house, in a quiet cul-de-sac on a settled estate, seemed almost normal; groups of boys pulling wheelies on their bikes up and down the street while other young people quizzed the media about what was going on and relayed news of the latest rumours.

All the while older members of the community passed the scene, looking on in disbelief. “It’s shocking that it’s happened here, on the doorstep of your own home,” one man told The Irish Times. “You see it in the papers and on the television but you never expect it to be here, God help them.”

On Wednesday night on the main green area on the estate, off Llewellyn Lawn, about 200 local people came out to remember the dead. Many, some with their young children, carried candles, others small lanterns. They gathered around a recently installed park bench before leaving their candles under the largest tree on the first real winter’s night of the season.

It was a makeshift and impromptu memorial by a Dublin community struggling to make sense of what had just happened in their midst.

Mary Byrne of the local residents’ association said she and the others present had come because they felt they needed to be together to remember Seema, Affira and Fazan.

“We didn’t know them very well, they were private people. And we’ve put this bench here lately because we have so many new people in the estate,” she said.

Asked how people were feeling, she said the estate was in disbelief and shock at what had happened.

“We just said we have to be here together for them. There is a lot of emotion, it’s just very sad,” she said.

Sean McLoughlin, a local man and Independent councillor, said the people from the estate had suddenly found themselves at the centre of a national news story that “the whole country is talking about”.

“It was just shocking news that emerged this morning and everyone here this evening is devastated,” he said.

Earlier in the day gardaí investigating the case appealed to the public to desist from speculating on social media about how the mother and two children had died.

Fine Gael TD Neale Richmond said it was important that gardaí be given the time and space to carry out their investigations. “This is truly harrowing news that has left many in what is a very quiet and close suburban community completely stunned,” he said.

“The family was relatively new to the area but the children were in school locally, it is just an awful situation.”