Speeding penalties: Ross to bring revised plan back to Cabinet 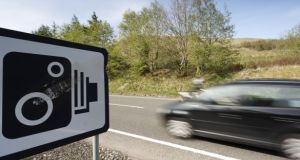 Plan proposes drivers detected travelling at speeds 10- 20km/h above the limit would receive between four and six points and a €150 fine. Photograph: Getty Images

Minister for Transport Shane Ross is to attempt to reintroduce plans for graduated penalties for speeding motorists, the Minister told an international conference on roads policing.

A first attempt to link excessive speeds to levels of penalties was sent back to the drawing board by Cabinet, after they were questioned by Minister for Justice Charlie Flanagan and Attorney General Séamus Woulfe.

Mr Ross had produced proposals which envisaged drivers travelling up to 10km/h above the speed limit would receive between three and five penalty points and an €80 fine.

Those travelling more than 30km/h above the limit would no longer be dealt with under the penalty points system and instead would face prosecution for dangerous driving.

However, the proposals were deferred to a Cabinet sub-committee after the Attorney General said there was “a question as to whether it is proportionate to stipulate the penalties in this manner.” In a Cabinet memo Mr Woulfe said, “10km/h over the speed limit in a 120km/h zone might not represent as big a danger or as intentional a wrongdoing as the same breach in a 30km/h zone.”

Mr Flanagan said there were concerns about the ability of gardaí to enforce graduated penalties.

But speaking at the European Traffic Police Network (Tispol) conference on Thursday, Mr Ross said the measure was currently with a Cabinet sub-committee and would be reintroduced by him very soon.

Addressing a session on Edward Day, a pan European initiative designed to have one day without road deaths, which coincided with the opening of the Tispol conference, Mr Ross said: I think Ireland needs greater sanctions on speed limits altogether”.

Referring to his proposals on graduated speed limits he said: “I intend to bring that back to the Cabinet and the Dáil at a very early stage.

“We recognise that speed is as big a problem as alcohol and that we have not got a very good record on speed in this country. It is not just a matter of reviewing the speed limits which are anomalous and don’t make sense in certain places such as county boundaries. But it is a matter of reducing speed and increasing the penalties. I think global evidence is quite clear that if you graduate the speed limits it is best international practise and it will save lives”.

Mr Ross told session facilitator Dr Margie Peden of the George Institute for Global Health at Oxford University that Ireland had “tackled the alcohol problem in very controversial circumstances last year, but we were successful eventually in getting the legislation through”.

He said he wondered if people in rural Ireland realised that the measures were to protect them. But he said “resistance in rural Ireland” had not come from the people themselves, but from “some vested interests”.

Mr Ross said he had asked local authorities to speed up their review of speed limits to help spread the prevalence of 30km/h limits and more information on the results of that would be visible by at the end of the year.

Edward Day is an acronym of the campaign slogan European Day Without a Road Death. The seminar in Dublin Castle was held as part of this year’s Tispol conference hosted by the Road Safety Authority. During the conference broadcast, Tispol reported 12 million people had interracted with the seminar.