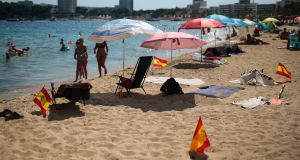 Spanish flags being used as social distancing markers stick out from the sand in Palma, Mallorca, one of the popular Balearic Islands in Spain. Photograph: Joan Mateu/AP

Spanish authorities have urged the Irish Government to add the Balearic Islands, including Mallorca and Ibiza, and the Canary Islands to the “safe” list for travelling Irish tourists

The State’s “green list” has identified locations where Covid-19 rates are comparable or lower than Ireland, and from which travellers coming to Ireland would not have to endure 14 days of restricted movement.

The current list includes 13 countries and two autonomous regions, Greenland and Gibraltar. Despite the existence of the list, the Government is still encouraging people to stay at home.

Spain and its islands were not included on the list, which is to be reviewed next week, which means that anyone travelling from anywhere on the Spanish mainland, or any of its islands are subject to isolation rules.

However the Spanish government has strongly urged other EU states to exclude the Balearics and the Canary Islands from restrictions, saying that Covid-19 rates there are low and they “are safe locations to travel”.

The Balearics include popular holiday destinations such as Mallorca, Menorca and Ibiza. Popular destinations in the Canaries include Gran Canaria, Tenerife and Lanzarote.

The Spanish Embassy in Dublin said: “We are focusing now on the situation in the Balearic and Canary Islands, both are safe locations to travel. The next review of the green list gives a good opportunity to include both.”

The Department of Foreign Affairs said the next review of the green list would be due next week and then every fortnight after that. The list is drawn up by the Cabinet, having reviewed the health advice.

Coronavirus: HSE apologises to thousands asked to do their own contact tracing 11:39
John Gilligan arrested along with two others in southern Spain 10:32
China’s scaled-up climate targets send ‘a pointed message to US’ 08:00
Thousands of gardaí mount checkpoints and patrol parks, beauty spots 07:35
£700m ‘wasted by delays and overruns’ in 11 key northern infrastructure projects 06:30