Taoiseach and Tánaiste will take pay cut of about €20,000 each 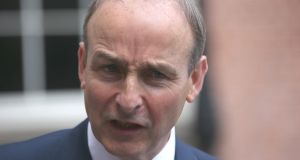 Government Ministers will take a 10 per cent pay cut on foot of a decision made by the Cabinet on Monday.

The cut will apply from the Taoiseach down to the Ministers of State, Taoiseach Micheál Martin said.

The Government has come under intense criticism over a change to legislation which ensured the three Ministers of State who sit at Cabinet received a €16,288 supplement to their pay.

The change was passed by the Dáil last week. It brought the total pay for Fianna Fáil Government chief whip Jack Chambers and Fine Gael Minister of State for Climate Change and Transport Hildegarde Naughton to €152,181 while Green Party Minister of State for Agriculture Pippa Hackett was to be paid €123,186. The ten per cent cut will apply to their new salaries.

The Taoiseach admitted the issue around the pay of super juniors could have been “handled better collectively by the Government, I would acknowledge that.”

“The Government today has taken a decision, which was in process, to give back 10 per cent of its salaries back to the State as and from the commencement of Government,” Mr Martin said.

“So that is a 10 per cent cut in the rate of pay from Taoiseach right down to the entire Government and Ministers of State as well. That has been formalised today by the Cabinet.”

Ministers have also agreed to forego a planned two per cent pay increase which would have been due in October under the public pay agreement, Cabinet sources said.

The decision comes after Government TDs hit out at the decision to increase the pay of Ministers of State who attend the Cabinet in a sign of a growing revolt among both backbenchers and senior figures in the main parties.

Fianna Fáil TD Willie O’Dea said his constituents were “incensed” about the decision and admitted it was “a bad signal” for the new Fine Gael, Fianna Fáil and Green Party Government to send out.

His party colleague Michael Moynihan told The Irish Times that “stupid mistakes” were presenting a credibility issue for a Government still in its infancy.

A senior figure in Fianna Fáil also said they were “embarrassed” to have voted in favour of the move to increase the pay of so-called super juniors and said it “displayed political insensitivity and stupidity”.

Mr O’Dea said the move “gives out a bad signal, there is no doubt about that. A lot of people in my constituency have been in touch with me and they are incensed about it.”

“It is the worst thing we have done so far. No one in the public is buying the legitimacy of this. Every type of spin can be put on it but it is wrong. It looks horrendous . . . Politically it is hugely damaging.”

Minister for Higher Education Simon Harris has said the decision was “an effort to fix an anomaly”. However, he accepted on Monday that this pay increase, at a time when hundreds of thousands of people have seen their incomes cut due to the pandemic, had “stuck in the craw” of people during what was “a very difficult time in our country”.

However, Mr Harris also hit out at some of the people voicing the strongest criticisms over the pay increase, including Sinn Féin TD Pearse Doherty, who the Minister said should “look at the actions and antics” of his own party , “in relation to the Northern Ireland institutions where over €4 million was claimed by Sinn Féin MLAs who didn’t even turn up to work for a year and a half”.

Below is the difference in effective salary rates for those involved before 10 per cent cut.

*Based on TD’s Salary