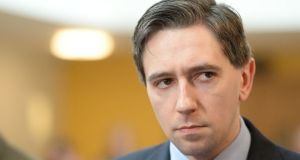 Minister for Higher Education Simon Harris said ‘when it comes to sexual harassment in third-level institutions there is a zero tolerance policy’. Photograph: Cyril Byrne

There is “a real epidemic in our country” around the issues of consent and sexual violence, Minister for Higher Education Simon Harris has said.

“We need to get really serious about this as a country” and in the third-level sector in particular “we need to take action”, he stressed.

Mr Harris was speaking at a meeting with the National Advisory Committee on sexual harassment and violence in third-level education at Dublin Castle on Monday.

He was, he said, taking “four immediate actions” which included requiring all universities and third-level institutions to publish an action plan on sexual harassment. He said the Higher Education Authority will be monitoring the implementation of a new framework.

There will also be an annual national survey of staff and students to monitor their experiences and a research project on sexual harassment in third-level institutions will be commissioned.

Mr Harris said he hoped these actions would show he intends to take the issue “extremely serious” and that it sends out a strong message that “when it comes to sexual harassment in third-level institutions there is a zero tolerance policy”.

When asked whether universities could face penalties if they failed to implement the policies, Mr Harris said he was conscious they are “autonomous” but also that the State is their “biggest customer”.

“We’re providing an awful lot of funding to them, including last week €268 million of additional funding, badly needed funding into our higher and further level sectors, so I fully respect autonomy but there is no place whatsoever for autonomy when it comes to the safety and protection of women and indeed men from sexual harassment,” he said.

“Each year as we allocate funding to the Higher Education Authority, we have conversations about certain criteria that needs to be met, and I’ll certainly be considering this whole issue of the framework of consent in that context.

“I do want to say this though – I do detect very clearly from our universities, from their representative bodies that they are very serious about getting on top of this issue as well so I think we’re working with willing partners in that regard.”

Orla O’Connor, director of the National Women’s Council, said said sexual violence and harassment has “a significant impact” on the lives of many female students at third-level institutes.

“These institutes are uniquely placed to show leadership on this issue and implementing the zero-tolerance culture and preventative measures,” she said.

A survey published last month found almost 30 per cent of female college students have experienced non-consensual sexual penetration due to force, the threat of force or while they were incapacitated.

The Sexual Experiences Survey, a report by the Union of Students in Ireland and the Active Consent research team at NUI Galway, examined the experiences of consent in higher education among people of different genders, sexual orientations, ethnicities and disabilities.