Some trading allowed at livestock marts under new measures 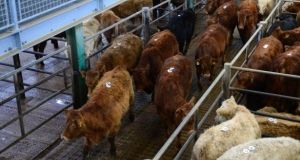 There will be no public auctions or crowds attending at marts during the coronavirus crisis. File photograph: Bryan O’Brien

Some trading at livestock marts will be allowed to proceed under new measures announced by the Minister for Agriculture Michael Creed on Tuesday.

Marts have been closed since last week due to fears about the spread of coronavirus. But marts will now be able to provide a limited range of services under the measures, including facilitating calf sales and weighing livestock.

The Department of Agriculture said a farmer can deliver calves to the mart, by appointment, and the mart can facilitate the sale.

For older livestock, the mart can also allow a deal between a buyer and seller, in specific circumstances.

“Other activities, including online and other uses of technology can of course also be considered,” it said.

Mart operators who wish to engage in such activity will have to submit a detailed written standard operating procedure to their local regional veterinary office. There will be no public auctions or crowds attending.

Minister Creed said the measures will allow the food chain to be maintained and protect animals’ welfare and that normal mart activity “cannot resume until further notice”.

Mr Creed said the economic impacts of the coronavirus crisis on agricultural and other commodity prices “are only beginning to be felt and are likely to be severe”.

“For many families, this impact will be compounded by the loss of off-farm employment. I am asking the food industry to do whatever it can to support its thousands of farmer suppliers at this time,” he said.

“The Government has already introduced a range of supports for employers and the self-employed, and along with colleagues across the EU, I will vigorously pursue the market support options available under our shared Common Agricultural Policy and Common Fisheries Policies, which should be deployed as soon as possible to mitigate the economic shocks.”

The Department has also announced that funding for a scheme to help farmers with calf welfare and rearing has had its funding increased from €1.5 million to €4 million.

The Irish Farmers’ Association (IFA) said it welcomed the move to facilitate marts but that more needs to be done as the beef market “is in turmoil” and significant measures are required at EU and national level to support farmers.

“The Minister and Government now have a lot more flexibility as the EU Commission have increased state aid limits,” said Tim Cullinan, president of the IFA. “While there a lot of other calls for funding, farmers cannot be forgotten and they need help now.”