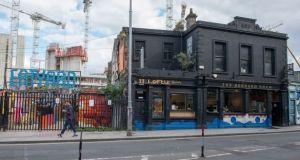 The company behind a pub which provoked claims of a cultural crisis in Dublin when it closed on the city’s southside last month has stoked a social media furore after depicting northsiders as weapon-wielding thugs as it opened a new premises in Glasnevin.

The company behind the Bernard Shaw, formerly operating in Portobello, posted a picture on its Instagram site to mark its opening in new premises showing five hooded youths in tracksuit bottoms, one carrying a machete, another a baseball bat and one giving the fingers.

It was captioned: “Northsiders before the Bernard Shaw moved.”

Below, and under the caption “After”, was an image of two women and two men in colourful hipster gear, smiling and drinking around an electronic keyboard.

The pub has reopened at Crossguns bridge, beside the Royal Canal, north of the Liffey, after the owners said they could not renew its lease or buy the building it was previously in on the southside.

The post, which has since been removed, sparked a backlash on social media including Twitter, where some users had reposted it.

“We all know the first thing you do when you move to an area is insult the people there. Good job Bernard Shaw, you have lost all sympathy anyone north of Portobello had for you,” tweeted one person.

Hey folks, Sophie here from the Shaw. The post earlier was my mistake, it was just a meme that got sent to us which I thought was poking fun at us at the Shaw. I put it up mainly to show we can take a joke more than anything and being a Northsider myself (Donaghmede native) I shared it. Others didn’t so we apologise for sharing it & we have deleted it. Sorry for any offence caused, genuinely was not intended to be that. Sophie & Shaw Crew.

Another posted: “F**k Bodytonic and the Bernard Shaw and the rest of their petit bourgeois empire profiting from fooling people that €6 pints is culture.

“Classist capitalists who profit from gentrification and hipsterisation of working class communities. We need to always ask ‘culture for who’.”

“Appalling discriminatory sh*te from The Bernard Shaw, who have squander (sic) the enormous goodwill they received with a single bigoted classist Instagram post,” said another.

However, others rushed to the defence of the pub operators Bodytonic, urging social media users to see the funny side.

“Lads, untighten your spleens. The Bernard Shaw post was clearly a joke!! Remember them? Jokes? As someone from Finglas I take no offence to it. Why do we have to be offended by everything now??? When did we lose our sense of humour???,” wrote one.

One tweeted: “Can’t get over the furore over The Bernard Shaw’s p*sstake of stereotypes. Folk round here were canonising them a month ago. Now they’re apparently fascists. It’s proof that you should never pay attention to the Twitter mob. Both praise and criticism are way too cheap on here.”

The company later apologised for the post saying it was put up “mainly to show we can take a joke”.

“Sorry for any offence caused, genuinely was not intended to be that,” the message said.

The Bernard Shaw had been operating since 2006 in the former Bambrick’s pub on Richmond Street. It was known as a hub for those interested in food, the arts, live music and flea markets.

Its closure in recent weeks drew much media coverage in Dublin, including a suggestion from some city councillors that it was symptomatic of the capital’s culture and character being replaced with homogenous hotels and chain restaurants.

The councillors, members of the Green Party, Labour and the Social Democrats, wrote to Dublin’s Lord Mayor seeking a special council meeting to discuss what they claimed was a “cultural crisis”.