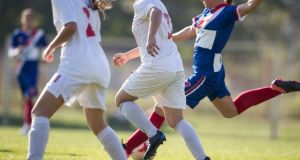 The Department of Sport said the main criteria for scoring grants included the likelihood of increasing sport participation, the level of disadvantage in the area and the funding received by the club previously. Photograph: iStock

The largest sports capital grants were given to three Dublin organisations, Knocklyon Community School, Mount Temple Comprehensive School and Sheriff Youth Club who were given €150,000 each to improve their facilities.

The Department of Sport awards announced on Friday cumulatively amounted to €37 million.

The spread of grants ranged in value with Valley Rangers FC in Cork which got €430; Fenagh Sports Grounds in Co Carlow which got €790; Bergerie Trust CLG which received €803 and Leitrim Co Council which got €955.

The Department of Sport said the main criteria for scoring grants included the likelihood of increasing sport participation, the level of disadvantage in the area and the funding received by the club previously.

Almost 1,000 sporting organisations shared in the grants from the final traunche of the 2018 sports capital grants, which were announced on Friday.

More than 10,000 projects altogether have benefited from sports capital funding since 1998, bringing the total allocations in that time to approximately €1 billion.

A review of all aspects of the 2018 round of the programme will now be undertaken and it is expected that a new round will open for applications in the coming months.