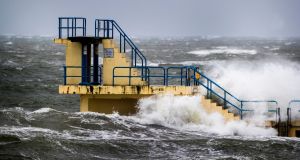 Met Éireann has issued a snow/ice warning for the entire country warning of widespread wintry showers on Monday and Tuesday.

The forecaster said there would be some snowfall accumulations, especially in the west and north. "Some disruption to travel is possible, particularly over higher routes," it added in a warning issued at midday on Sunday. The yellow weather alert is in place from midnight on Sunday until midnight on Tuesday.

It said it would turn much colder on Sunday night "with showers turning wintry and giving falls of sleet and snow in some areas.

"Some snow lying by morning especially over hills in the North and West. Overnight lows of 0 to 3 degrees in strong westerly winds."

It said Monday would be bitterly cold and very windy with a significant wind chill factor. "There will be a mix of sunny spells and widespread wintry showers with accumulations of snow in some areas. Highest temperatures of 3 to 6 degrees in strong westerly winds and with gales at the coast", it added.

"At the moment it looks like turning wet and windy for Wednesday evening/night followed by squally showers on Thursday with the ongoing risk of severe winds at times and wintry falls."

The wintery weather follows extremely wet and windy weather over the weekend that left thousands without power. A status orange wind warning for the entire country was issued as Storm Ciara passed over Ireland.

There was some travel disruption to flights and sailings into and out of Ireland. Aer Lingus advised travellers to check the status of their flight before departing for the airport, while Irish Ferries warned passengers there would be some disruption to sailings over the coming days .

The National Parks and Wildlife Service closed a number of parks around the country on Sunday and advised the public to not visit any national monuments or nature reserves while the warning is in place. The bad weather forced the organisers of Galway 2020 to cancel the opening ceremony.

1 Dangerous student stalker sentenced to seven years in jail
2 All students will not return to school even if social distancing rules are relaxed – McHugh
3 Miriam Lord: Reluctant Halligan bangs the nail on the head
4 Trump announces clampdown on social media companies
5 Miriam Lord: Taoiseach is trapped in a Zoom session from hell
Real news has value SUBSCRIBE