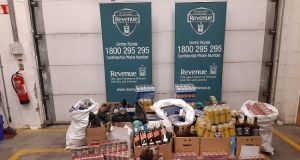 The seized products were discovered when Revenue officers conducted an examination of two vans which had arrived in Dublin Port via Hollyhead. Photograph: Revenue

A Dublin Port sniffer dog called Kelly was key to finding almost 50,000 cigarettes and 2.6kg of tobacco which were being smuggled into the State on Wednesday morning.

Through a combination of routine profiling and the detector dog Revenue officers seized 44,000 cigarettes which were branded ‘Marlboro’, ‘Rothmans’, ‘King’, ‘Sobraine’, and ‘Dunhill’ while the loose tobacco was branded ‘Old Holborn’, ‘Golden Virginia’ and ‘George Karelias & Sons’.

Revenue officials said the find had a combined estimated value of almost €23,000 and would have represented a loss to the exchequer of €19,630 had it entered the country undetected.

As part of the same operation, Revenue officers also seized 308 litres of smuggled alcohol with an estimated retail value of €6,700, representing a loss to the exchequer of €3,938.

The seized products were discovered when Revenue officers conducted an examination of two vans, driven by men originally from Bulgaria, which had arrived in Dublin Port via Hollyhead. The investigations are ongoing.

These seizures are part of Revenue’s on-going operations targeting smuggling and the supply and sale of alcohol and cigarettes in the shadow economy and businesses or members of the public with any information regarding smuggling or the sale of illegal cigarettes or tobacco, have been urged to contact Revenue in confidence on 1800 295 295.