Investigation into garda’s murder will continue despite conviction

Inquiry to go on ‘relentlessly so others responsible for dreadful events ... may be brought to justice’ 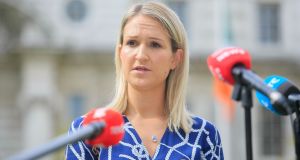 Minister for Justice Helen McEntee: Commended the Garda force for their “determined, persistent and painstaking investigation” that resulted in the murder conviction of Aaron Brady. Photograph: Gareth Chaney/Collins

The Garda investigation into the murder of Det Garda Adrian Donohoe would continue despite the conviction of south Armagh man Aaron Brady and would be “relentless” in pursuit of other criminals involved, Minister for Justice Helen McEntee has said.

The Minister commended the Garda force for their “determined, persistent and painstaking investigation” that resulted in the conviction on Wednesday of Brady (29) for the capital murder of Det Garda Donohoe during an armed robbery at Lordship Credit Unit, Bellurgan, Co Louth, in January 2013.

Ms McEntee added that investigating gardaí had received “crucial co-operation” from the PSNI and law enforcement in the US during the murder investigation.

“My hope, now that a person has been brought to justice for an unspeakably callous act committed against a decent and honourable garda, working in the course of his duty to protect his community, is that this can bring some element of comfort to Det Garda Adrian Donohoe’s wife and family, his many friends and loyal colleagues,” she said.

“I know too that the investigation will continue relentlessly so that others responsible for the dreadful events that night may also be brought to justice.”

The Garda Representative Association (GRA), which represents rank and file gardaí and counted Det Garda Donohoe as a member, welcomed the verdict against Brady.

“Our first thoughts are with the family of Adrian Donohoe. No verdict and no sentence can ever replace the life taken from them,” said GRA president Jim Mulligan. “Adrian’s two children, who are still young, will never get their father back. Caroline, Adrian’s wife, will never get her husband back.

“We can only hope that today’s verdict begins the process of bringing healing and closure to Adrian’s family.”

He and his colleagues were very hopeful others would now also be brought to justice for the murder, Mr Mulligan added.

“Adrian was a detective garda from a family steeped in Garda tradition. Our thoughts are with them and with Adrian’s Garda colleagues who lost a great workmate and a great friend on that fateful night seven-and-half years ago.”

The Association of Garda Sergeants and Inspectors (Agsi) said Det Garda Donohoe had made “the ultimate sacrifice” in serving the State, adding its first thoughts were with his wife Caroline and two children.

“While some justice has been served with today’s conviction for murder, no sentence will ever return Adrian to his family – the ultimate injustice is to have your life taken away,” said Agsi general secretary Antoinette Cunningham.

“Adrian was a man of distinction who served his community as a Garda, as an inter-county footballer, but also as a volunteer. He will never be forgotten.

“We would like to pay tribute to the entire investigation team who worked on a transnational basis to secure today’s conviction. We also want to thank our international colleagues whose involvement was central to this case.

“We are mindful that the case is still a live one and we wish our colleagues well in progressing their investigations.”