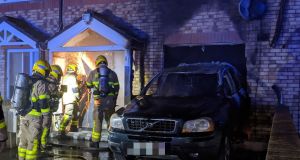 A car was reversed into the downstairs living room of the terraced house in Clondalkin, destroying the wall and taking the window and frame out.

A house in Dublin seized from Liam Byrne, the gang leader who works for the Kinahan cartel, has been extensively damaged in an arson attack that saw a car deliberately crashed into the living room of the property before the car and house were petrol bombed.

A car was reversed into the downstairs living room of the terraced house in Clondalkin, destroying the wall and taking the window and frame out. A fire was then started using petrol bombs as part of the attack which destroyed the Volvo vehicle driven into the house as well as the interior of the property.

The house on Grange View Road, Clondalkin, was securely boarded up having been seized by the Criminal Assets Bureau as part of its multi million euro cash and assets seizure from Byrne and a number of people linked to him.

In March 2019, the house in Clondalkin and a property owned by one of Byrne’s associates at Kildare Road, Crumlin, were both vandalised after being seized by Cab.

During the attack on the house in Clondalkin last year the windows were smashed while fixtures and fittings were removed or smashed. The house was also flooded as a result of water pipes and sanitary ware being removed or damaged. Gardaí were alerted to that incident when they received reports of men kicking in the front door, though the damage was extensive by the time gardaí arrived.

The latest attack occurred in the early hours of Wednesday, with Dublin Fire Brigade and gardaí attending the scene on receiving reports of the car being crashed into the property and the fire being started.

“Four fire engines and an emergency ambulance from Tallaght fire station were called to a house fire after reports of a jeep crashing into the building,” Dublin Fire Brigade said. “No one was injured and firefighters prevented the fire from spreading to adjoining properties.”

Gardaí were treating the incident as one of “criminal damage”, with a criminal investigation now underway in an effort to catch those who attacked the property. One strong line of inquiry is that the attack was carried out on behalf of Byrne.

The 39-year-old father of three from Crumlin, Dublin, was described in the High Court during the Cab case as the leader of the Byrne organised crime group, based in Dublin.

He was named in Cab evidence to the court as one of the main figures in the Kinahan-Hutch feud, which the bureau said was between Byrne, Freddy Thompson and Daniel Kinahan on one side against veteran Dublin criminal Gerry Hutch, also known as The Monk, on the other.

The Cab contends that Liam Byrne is a “trusted lieutenant of Daniel Kinahan and the Kinahan organised crime group”. With Liam Byrne as leader, the Byrne group is involved in “the importation and distribution of controlled drugs and firearms” in the Republic.

And the Kinahan crime group is involved in the importation and distribution of drugs and firearms in the Republic, the UK and mainland Europe.

Byrne has spent recent years living in the UK and has been based around the Birmingham area.