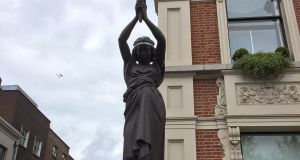 The Shelbourne Hotel in Dublin has taken down four statues which have stood outside it for the last 153 years because of their associations with slavery.

The four bronze statues were commissioned by the Shelbourne Hotel’s owner in 1867 when the celebrated facade was erected.

They depict two Nubian princesses from the lower Nile and their slave girls holding torches.

Nubia was for a long time a rival kingdom to Ancient Egypt before it was conquered by the Egyptians and its art was an important influence in the 19th century.

The princess statues had hieroglyphics down the front of them.

The statues were cast in bronze and commissioned from the studios of MM Barbezat of Paris.

The Shelbourne Hotel, which has been situated on St Stephen’s Green since 1824, removed them on Monday in line with the decision by other bodies and local authorities to remove statues relating to the slave trade.

The hotel’s general manager JP Kavanagh said the decision to take the four statues down had been taken by them alone and there had been no complaints from outsiders about them.

“It was a decision taken just by us with our owner and operator. This decision has been coming for a number of weeks given what has been happening in the world,” he said.

“When we restored the facade in 2015 and 2016, we consulted with Irish Heritage and the Irish Georgian Society.

“What comes next I don’t know at this stage, but we will work with the relevant authorities.”

Mr Kavanagh said there was a possibility that some or all of the statues might be restored to their old plinths but “right now” that is not an option and they hoped to work with Irish Heritage to replace them. “We will share further information in due course,” he added.

The five-star hotel underwent a €40 million renovation programme between 2005 and 2007 and was closed for 18 months. It celebrated 195 years in business last year.

It was acquired by the global real estate company Kennedy Wilson in 2014 and two year later it completed a significant refurbishment of the exterior facade that later won the Irish Georgian Society’s top award. However, there was no attempt to remove the statues at that stage.

However the Irish Georgian Society on Tuesday raised the question about the need for planning permission to remove the statues. It said “in the interests of clarity, the IGS was not consulted about the removal of statues from The Shelbourne Hotel”.

Green Party MEP for Dublin Ciaran Cuffe called for a period of public consultation about the statues. The 265-room hotel is operated by Marriott International.