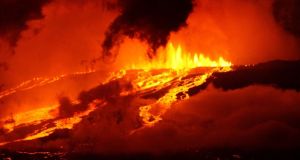 The 2015 eruption at Wolf Volcano in the Galápagos Archipelago. Photograph: Gabriel Salazar

Some volcanoes are plain boring with a predictable pattern of activity over millions of years; others are more explosive and unpredictable.

Scientists have discovered why this is the case, and the circumstances whereby the quieter volcano can change into an angry eruptor.

This is the result of research by a team of volcanologists working on remote islands in the Galápagos Archipelago off South America.

It has found “volcanoes which reliably produce small basaltic lava eruptions hide chemically diverse magmas” – hot fluid or semi-fluid material below or within the earth’s crust from which lava is formed on cooling – in their underground plumbing systems, including some with potential to generate explosive activity.

Many volcanoes produce similar types of eruption over millions of years. Those in Iceland, Hawaii and the Galápagos Islands consistently erupt lava flows – comprised of molten basaltic rock – which form long rivers of fire down their flanks.

Although these lava flows are potentially damaging to nearby houses, they generally move at a walking pace and do not pose the same risk to life as larger explosive eruptions, like those at Vesuvius or Mount St Helens. This long-term consistency in a volcano’s eruptive behaviour is critical to informing local authorities on hazard planning.

The research team including scientists from the US, UK and Ecuador, studied two Galápagos volcanoes, “which have only erupted compositionally uniform basaltic lava flows at the Earth’s surface for their entire lifetimes”.

By deciphering the compositions of microscopic crystals in the lavas, they were able to reconstruct the chemical and physical characteristics of magmas stored underground beneath the volcanoes.

“The results of the study show – in contrast with the monotonous basaltic lavas erupted at the Earth’s surface – magmas beneath the volcanoes are extremely diverse and include compositions similar to those erupted at Mount St Helens,” Dr Stock explained. Their research was published in Nature Communications on Tuesday.

They believe volcanoes consistently erupt compositionally uniform basaltic lavas when the amount of magma flushing through the ground beneath the edifice is high enough to “overprint any chemical diversity”. This can occur when volcanoes are located close to a “hot spot”; a plume of hot magma rising towards the surface from deep within the Earth.

However, the chemically-diverse magmas which the team discovered could become mobile and ascend towards the surface under certain circumstances.

“In this case, volcanoes that have reliably produced basaltic lava eruptions for millennia might undergo unexpected changes to more explosive activity in the future,” he added.

“This was really unexpected. We started the study wanting to know why these volcanoes were so boring and what process caused the erupted lava compositions to remain constant over long timescales. Instead we found they aren’t boring at all – they just hide these secret magmas under the ground.”

Although there is no sign Galápagos volcanoes will undergo a transition in eruption style any time soon, their results show why other volcanoes might have changed eruptive behaviour in the past.

“Just because they’ve always erupted a particular way in the past doesn’t mean you can rely on them to continue doing the same thing indefinitely into the future,” Dr Stock noted.

Co-author Dr Benjamin Bernard of Instituto Geofísico in Ecuador, added: “This discovery is a game-changer because it allows us to reconcile apparently divergent observations, such as the presence of explosive deposits at several Galápagos volcanoes. It also allows us to better understand the behaviour of these volcanoes, which is essential for volcano monitoring and hazard assessment.”