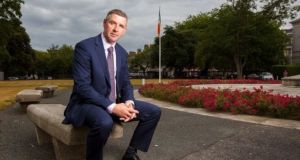 Asking unionists what kind of united Ireland they want is like asking turkeys what kind of sauce they want to be served with at Christmas, Senator Ian Marshall has said. Photograph: Patrick Bolger/Bloomberg

Asking unionists what kind of united Ireland they want is like asking turkeys what kind of sauce they want to be served with at Christmas, Senator Ian Marshall has said.

Senator Marshall, who who was elected to the Seanad in a byelection last year, suggested that no unionist would become engaged in a conversation about the future if a united Ireland was regarded as a fait accompli.

He warned there was a danger of leaving loyalist communities behind in any conversation about Irish unity and the consequences could lead to violence against the Republic.

“There is a possibility of a negative reaction. I don’t think it is a majority within loyalism. Anybody who lived through the horrors of the past never wants to go back there, but if you poke them within the eye, you run the risk of triggering some kind of reaction.

“This is very emotive. My concern is that if you push people into a corner, they will come out barking at you. You can remove that threat by engaging people in dialogue.”

Senator Marshall, who is the first person of a unionist background to be elected to Seanad Éireann since the 1930s, said unionism is not understood in the Republic the way it should be.

He is a former president of the Ulster Farmers Union. He was approached by Mr Varadkar to stand as an Independent and topped the poll with the support of most of Fine Gael, Sinn Féin and Independents.

Unionism is diverse and more representative than the DUP would suggest, he claimed and many unionists, including himself, are progressive and liberal on issues such as marriage equality and abortion.

“Those advancing a united Ireland have an imprecise understanding of liberal attitudes and commitments to peacemaking within the pro-union community,” he said.

“We are told that unionism is dour and uncompromising when in fact significant sections of unionism are behind marriage equality, pro-choice, social economy, anti-poverty, reconciliation work, restorative justice and the support of workers’ rights.”

However, he stressed there was no division in unionism about opposition to a united Ireland while nationalists were divided on the national question. He suggested 60 per cent of people in Northern Ireland are still in favour of the union.

Any analysis of the economic weakness of Northern Ireland should also focus on the Republic too, he added.

He suggested that the future of the island should be discussed through a civic dialogue which draws people together to discuss the future through the Initiative for Civic Space (ICS) and the Institute of Irish Studies at the University of Liverpool.

“Unity is a topic of conversation, but not the burning issue they think of when they wake up every morning,” they say.

“If we consider Irish unity we should perhaps consider the most important aspect first – united people. Because if we first unite the people then the land and territory and jurisdiction becomes much less challenging. And it’s with this in mind that the civic space initiative has been undertaken.”

The IBIS announced its Constitutional Futures After Brexit project in which it anticipates that the next decade will be dominated by the fallout from Brexit and the possibilities of constitutional change in both the UK and Ireland.

Constitutional Futures envisages public events in Northern Ireland, the Republic and in Scotland after Brexit while also engaging academics and institutions in both Britain and Ireland.

Speaking at the event, Senator Mark Daly accused the Government of being unwilling to carry out a risk assessment on a border poll.

The risk assessment for the State is carried out by the Department of Transport, Tourism and Sport.

Senator Daly suggested that not preparing for a referendum on a united Ireland “represents a serious risk to people on this island as well as both a financial and political risk”.