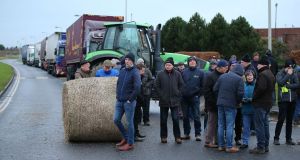 A second Irish Farmers Association (IFA) blockade in protest over beef prices is expected to take place at an undisclosed location in Cork on Friday morning.

It follows a 12-hour action at a major Aldi distribution centre in Naas, Co Kildare, on Thursday representing the latest in a long-running series of beef price demonstrations.

Should it proceed Friday’s action will come just days after the resumption of the beef taskforce, the industry and farming body established to oversee previously agreed sector reforms.

The IFA said it was demanding a “significant and immediate” shift in price to bring it in line with European exports. “We will continue to take action until processors give a significant price increase.”

According to the IFA, Irish prices are currently 20 cent per kilogram or €80 per animal behind the Bord Bia European price tracker and 50 cent or €180 behind the UK.

“The supply chain is delivering mega-profits for factories and retailers at the expense of farmers,” the association’s president Joe Healy said. “We can have all the reviews we like but farmers need a price increase now.”

Although details of Friday’s blockade have not been publicised, it is likely to follow the same 12-hour model and come under the official IFA banner.

Outside Aldi two tractors, a flatbed trailer and three large bales of hay were used to cut off access to the facility. About 100 farmers attended throughout the day.

The German retailer said it was “extremely disappointed” by the protest, and that it had a policy of open communications with stakeholders, including the IFA.

The move followed recent tractor protests in Dublin city by “independent” farmers as well as factory blockades last summer. During those events the IFA was criticised for its lack of participation.

Representative body Meat Industry Ireland (MII) said the IFA blockade was “an irresponsible and completely unjustified stunt”, and accused it of undermining efforts to resolve the crisis at an official level.

“Disrupting normal business operations and harming the livelihoods of associated service providers does nothing to help the market situation,” it said .

Minister for Agriculture Michael Creed said on Thursday that farmers “should be paid the maximum price the market will allow”, and urged positive engagement through producer organisations and the beef market taskforce

A number of industry sources pointed out that the IFA blockade coincided with a report published in the Irish Farmers Journal noting an imminent rise in beef prices.

However, it added that a lack of a solid commitment to an immediate increase has angered farmers.

The Beef Plan Movement, another group agitating for price increases and sector reforms, said the IFA action was “regrettable” as Aldi, unlike many other retailers, had recently come out in support of Irish beef farmers.

The supermarket chain, it said, was undertaking to work with the beef taskforce.

“Why has the IFA chosen to protest outside a retailer who has given a firm commitment to work with and support Irish beef farmers?” it said.