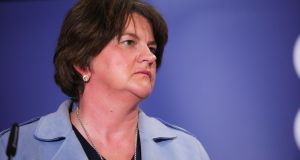 The Northern Catholics bishops have written to Stormont Assembly members calling on them to reject new abortion legislation for Northern Ireland that was enacted at Westminster.

Ahead of a debate in the Northern Assembly on Tuesday the Catholic primate Archbishop Eamon Martin and fellow northern bishops wrote to MLAs saying that the legislation was “an unjust law, which was imposed without the consent of the people of Northern Ireland”.

The bishops also decried the element of the legislation that allowed for abortion up to full term in cases such as Down’s syndrome.

The Assembly is set to discuss a DUP motion that “welcomes the important intervention of disability campaigner Heidi Crowter and rejects the imposition of abortion legislation which extends to all non-fatal disabilities, including Down’s syndrome”.

Sinn Féin has put down an amendment that alters the DUP motion so that it would read that the Assembly “welcomes the important intervention of disability campaigner Heidi Crowter and rejects the specific legislative provision in the abortion legislation which goes beyond fatal foetal abnormalities to include non-fatal disabilities, including Down’s syndrome”.

Ms O’Neill said on Monday her party believed the DUP motion was “an attempt to reject the entire abortion legislation that has gone forward in Westminster”.

She said, however, that Sinn Féin did not support the element of the legislation “which goes beyond fatal foetal abnormality to include non-fatal disabilities including Down’s syndrome” and the Sinn Féin amendment reflected that position.

Grainne Teggart of Amnesty Northern Ireland said the DUP motion “will change nothing legally but is a clear signal that the DUP wants to roll back the hard-won rights of women and girls”.

“Sinn Féin and other parties must not prop up a dangerous anti-choice agenda – instead, they should support human rights and show they’re on the side of women,” she said.

First Minister Arlene Foster said the DUP motion addressed the “distressing issue” of the abortion of foetuses with Down’s syndrome.

“We hope we will get the support of colleagues across the Assembly to deal with that issue so that we can send a message to Westminster that we do not agree with their proposals that they are putting forward,” she said.