Future Leaving Cert exams may be influenced by ‘calculated grades’ 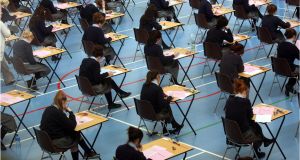 This year’s calculated grades process for Leaving Cert students could influence how future end-of-school exams are carried out, the president of a teachers’ union has said.

Seamus Lahart, president of the Teachers’ Union of Ireland, said the union is in principle opposed to the idea of teachers grading their own students for the purposes of State exams.

However, Mr Lahart said the calculated grades process – in which teachers and schools award grades to Leaving Cert students – was a necessity this year and aspects of it could inform future types of assessment.

“We never did this before and, as a teachers’ union, we’re not in favour of teachers grading their own students for State exams. But is the process worth having a look at? Of course,” Mr Lahart said.

“It’s been a leap in the dark and has only happened because we have no other choice this year. Would we like to see the outcome of this process? Absolutely. And could it inform how we should examine students in a future Leaving Cert? Of course it could.”

Mr Lahart said teachers and policymakers would be keen to examine whether the process is deemed to be a success.

“It’s not to say that we want to run this type of assessment again, but it might inform us about the way we run the Leaving Cert and the type of values we want to assess in future,” he said.

While the academic year at second level is finished, secondary teachers are still engaged in the process of awarding grades to students.

Schools are due to send information on students’ grades and class rankings to the Department of Education over the coming weeks.

They will then go through a standardisation process, where grades may be adjusted up or down in line with national trends, before being released to students in August.

A total of almost 1,000 Leaving Cert students, however, have not registered in time for last Friday’s deadline to receive their calculated grades.

The department is to engage with schools over the coming weeks in an effort to establish why some students may not have registered on the portal.

Minister for Education Joe McHugh has also said his officials would also engage with schools over the coming weeks in an effort to establish if there are reasons that some students could not register.

Meanwhile, Department of Education officials are due to meet school and parent representatives in the coming days to discuss plans to reopen schools in late August.

The outcome of the talks will feed into a detailed roadmap for how schools will be reopened, which is due to be completed next week.

Among the key issues set to be discussed include how pupils may be safely accommodated in classrooms and what kind of support will be required for cleaning and hygiene purposes.

One option under consideration is a plan to designate entire groups or classes as “pods” which do not mix with other school classes.

This would allow most pupils to resume school on a full-time basis, but it is questionable if it would comply with public health advice.

Officials are also examining a proposal to reopen some schools for children with special needs and those at high risk of disadvantage as part of a “summer programme” of support.