Scout group calls for senior volunteers to step aside 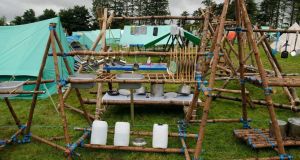 Scouting Ireland hired a barrister to carry out an independent investigation into actions of individuals “referred to adversely” in child protection expert Ian Elliott’s report.

All senior Scouting Ireland volunteers criticised in child protection expert Ian Elliott’s report should step aside pending the findings of an ongoing independent inquiry, a scout group in Co Louth has said.

Elliott’s report found the organisation’s handling of an allegation made by a female leader in 2016, who claimed she was raped by a male leader on a camping trip seven years earlier, was “deeply flawed”.

Breaking ranks, St Patrick’s scout group called for “all those named in the Elliott report to step aside until such time as the independent investigation is concluded”.

In a statement, the Dundalk-based group said reports in The Irish Times on the details of Mr Elliott’s confidential review, “relate to the national association and failures at that level”.

“At all times the safety and welfare of our youth and adult members is paramount. Our scouters receive appropriate training to fulfil their roles. Inappropriate behaviour is not tolerated,” the statement said. St Patrick’s scout group is one of the larger troops in the country, with nearly 200 members.

Scouting Ireland hired barrister Lorna Lynch to carry out an independent investigation into the actions of individuals “referred to adversely” in the report, which is due to be completed next month.

The organisation’s board will consider “disciplinary actions” based on its findings, according to confidential board minutes from January.

An internal crisis management group recommended in early March that Mr McCann, Mr Shalloo and Ms Bermingham should step aside. None have done so, and Mr McCann was re-elected for a second term at their national council on Saturday.

Allan Mathews, group leader of St Patrick’s scout troop in Dundalk, said he was concerned with how the board dealt with the Elliott report, particularly with how the crisis group’s recommendations “weren’t followed”.

“I can’t understand why people are all rowing in behind them, we’re leaders not sheep,” he said. Mr Mathews (34) has been involved in scouting since he was eight years old. “Going against the grain will tar my name in the organisation,” he said, but he maintained his position “is to do what’s best for my local group”.

Mr Mathews said the group’s statement was “not a personal attack on anyone”, and added board members put in a “serious amount” of voluntary hours work each week.

Minister for Children Katherine Zappone has suspended State funding, worth nearly €1 million a year, until concerns around the governance of Scouting Ireland are resolved.

The organisation, which has 40,000 juvenile members, 12,000 adult volunteers, and 35 staff, has funding reserves to last two to three months.

Mr Mathews said he was “shocked” by the details of Elliott’s report, and said he was surprised there were not more members in the organisation openly angry about the matter. “There’s nobody else really who sees it from our point of view,” he said.

“We wanted to reassure our youth members, leaders, and parents” that the local group adhered to safeguarding standards, he said, adding that current coverage “looks bad” for the organisation.

St Colmcille’s Belfast scout group also issued a statement in recent days. Group leader Paul Browne said “apparent failures” in safeguarding policies were “at a very senior level in Scouting Ireland, and do not in any way relate to the activities of the 11th Belfast scout group”.

Only members of the board have officially seen Mr Elliott’s report, which was not circulated to the wider membership. All hard copies are securely locked in Scouting Ireland’s headquarters at Larch Hill, Dublin 16.

“I can assure you most emphatically that the welfare of every youth member belonging to the 11th Belfast scout group is of the utmost importance to every leader and committee member associated with the group,” Mr Browne said. The Belfast group is also a large troop, with about 120 members.

Scouting Ireland has committed to overhaul their governance structure, and change how their board of directors is made up. Their national council decided to bring forward a planned extraordinary general meeting on the proposed changes from October to June.

“In each of the cases that I examined there was evidence of the subject of the complaint making attempts to influence the process through lobbying,” Mr Elliott said. “To anyone outside the organisation, such behaviour would be viewed as unacceptable, and yet it appears to have been unchallenged,” he said.

Covid-19 will ‘spiral out of control’ if we don’t stop people mixing in Dublin’s bars and restaurants, says NPHET expert 12:58
Coronavirus: Dublin hospitals under ‘significant pressure’ as county set for Level 3 12:00
Infant hurt after scrambler crashes into stationary quad in Dublin 09:40
Trump envoy to Northern Ireland warns against hard border 08:48
Man due in court over robbery of wheelchair user in Cork 08:06