Supporters club may protest over handling of Jackson and Olding 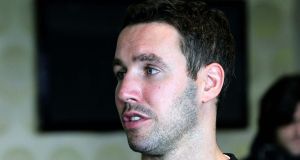 The official Ulster Rugby Supporters Club (URSC) is canvassing its 1,000-strong membership on what possible protest action it could take over the province’s treatment of Paddy Jackson and Stuart Olding.

On Saturday, both players, who were acquitted of rape at Belfast Crown Court last month, had their contracts revoked by the IRFU and Ulster as sponsors and the wider public raised concerns about details that emerged during the trial, including degrading and offensive WhatsApp messages. Jackson was also acquitted of sexual assault.

It has been suggested fans could cancel season tickets and even protest at Ulster’s next match, against Glasgow at the Kingspan Stadium, on Saturday evening.

A statement on the group’s website encouraged members to respond to a questionnaire it has circulated “to help the committee accurately reflect the feelings of URSC members and act accordingly”.

Former Ireland international Paddy Wallace, who represented Ulster from 2001-2014, said he had “gauged the temperature” of fans and could see they were considering protesting the decision in a number of ways.

He said a “strong section” of fans were very upset the players had been let go.

“There is a lot of chat and noise about cancelling subs but at the game itself I don’t know if there will be a demo outside like at the weekend [from feminist activists calling for Ulster to effectively deal with misogyny],” he said.

Wallace said Jackson and Olding would have liked to stay on at Ulster but he believed they had “accepted circumstances won’t allow that”.

Wallace said he had been subjected to online complaints from people accusing him of “apologising for the behaviour”.

“I am just giving an indication of how fans feel. It is not black and white.”

Dr Katie Liston, a senior lecturer at Ulster University’s School of Sport who played rugby for Ireland in the late 1990s to early 2000s, said it was not surprising fans were exhibiting a variety of views, some of which were contradictory or not consistently logical.

Dr Liston said some take a straightforward position as they see it: a not guilty outcome should lead to the reinstatement of the players concerned and to the continued preservation of the philosophical notion that sport is above politics of any kind.

“It is simple and unchallenging,” she said.

“In this position, sport – rugby – is pure and should remain so. Therefore, we return to the status quo and ‘all is well’ when the game of rugby continues.”

Dr Liston said this position – sport being ideologically neutral and pure – was fundamentally flawed because politics with a small p, whether of a personal or party kind, was inextricably linked to sport.

“Sport isn’t immune from social life, it is in fact a critical part of it,” she said.

“Sport reflects wider social values and issues and, in some cases, generates dynamics of its own that warrant analysis in their own right.

“Think, for instance, of the positive deviance that is permitted in rugby in relation to aggression on the field of play that, in every life, is punishable in the courts.

“It is possible that those fans who called for the removal of players also wanted rugby to remain pure.”

Dr Lister said as a sociologist she was heartened to see everyone take more seriously the messages that were conveyed through sport but the opportunity must be grasped to generate more sustained and collective dialogue around the cultural practices associated with sex and gender.

“It took an horrific case to get to this point,” she said.

“But the removal of the players is not the end.”

Ulster Rugby will need to clarify what precisely they mean by their particular corporate values, Dr Lister said.

Rather than the removal of the players being “a commercial cleansing” she said it should be the beginning of “a process of sustained reflection by all of us on the worst excesses of celebrity culture and on how we continue to objectify sex and gender”.

A spokesman for Rugby Players Ireland, the union for professional players, says it was liaising with the IRFU and Ulster Rugby around how the review process was carried out and the commitments made in it last week to examine structures and education programmes.

An Ulster Rugby statement was not available at the time of publication.

In a blog post on Sunday, Singapore-based former Ulster and Ireland player Neil Best said “there is no easy fix for Ulster Rugby and their fans”.

“Routinely, Ulster supporters have learnt from Dublin-based journalists the latest and breaking news about their Belfast-based club – whether it be the arrival of Les Kiss, the departure of Ruan Pienaar or the current shortlist to replace Jono Gibbes – the news emanates from Dublin – showing clearly where decision-making power lies,” he said.

“Ulster must learn to steer their own ship and until they do they won’t be sufficiently selfish to navigate a path to club success.”

He spoke of a feeling among some fans that the players had been scapegoated by the club.

He believes the success of Jackson and Olding at new clubs “will provide a weekly reminder of all that is wrong with Ulster Rugby – no strategy or plan, inconsistency on and off-field and growing disconnect with the fans – all the while subject to direction from Dublin who historically retained other high-profile players amongst scandals of sexual conduct not without parallels”.

He said he could not remember a time when Ulster Rugby had been “so at odds with so many of their supporters”.