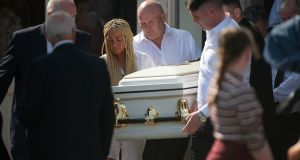 The requiem Mass of two-year-old Santina Cawley, who was killed in Cork last week, has heard she was a happy child who always made her mother smile and laugh.

Chief celebrant Fr Oscar O’Leary told mourners that Santina had a particular fondness for the Teletubbies.

The priest said Santina knew what she wanted. “She was very fond of the Teletubbies and if there were any other children around when the Teletubbies were on she would say to them to ‘Hush. I want to watch this’.”

He said her life may have been tragically short but she brought happiness to all those who knew her in her two years. Fr O’Leary said Santina was a little angel.

Fr O’Leary said Santina’s mother Bridget had described her daughter as “my angel. She always made me smile and laugh.”

He said: “Santina was truly loved. Her life was short. But remember, it is not the length of days but what we put in to it,” he said.

Santina’s relatives wore white T-shirts with her image printed on the front. The back of the shirts bore the words “RIP Santina.” Balloons with her image were also placed at the top of the church.

Offertory gifts, which were taken to the altar by her siblings Candice, Michael, Patrick and Thomas, included a pink teddy bear and a troll doll. Her father Michael cut a poignant figure, standing for much of the Mass with his hand on the coffin.

At the end of the Mass, Santina’s mother, her three older brothers and her sister went to the remembrance tree at the top of the church and placed her name on it.

There were emotional scenes as her parents and siblings carried her white and gold casket from the Cathedral of St Mary and St Anne to the hearse which took her to St Catherine’s Cemetery in Kilcully, Co Cork, for burial.

Santina was found with critical injuries at the Elderwood flat complex in Boreenmanna Road in Cork city on July 5th. She was taken by ambulance to Cork University Hospital (CUH) where she died four hours later.

In a statement issued to the media her family said that they would forever mourn the loss of their “precious Santina”. They also expressed gratitude to members of the public who raised funds through to meet the cost of the funeral.

“The family are extremely grateful for the level of support, prayers and generosity the public have shown to them. Baby Santina’s family can’t express what it means to them.”

Bishop of Cork and Ross Most Reverend Fintan Gavin offered his condolences to the family. He apologised for not being able to attend but said her parents were in his thoughts and prayers.

Meanwhile, gardaí have renewed their appeal for information as more than 30 officers continue their murder investigation.

Gardaí have appealed to members of the public who were in the Boreenmanna Road area last Thursday night and Friday morning to contact them.

A woman, who is not related to Santina, was questioned by gardaí in relation in the death. She was released without charge.