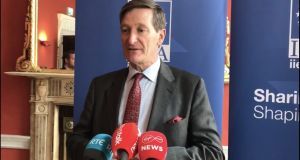 Dominic Grieve told an audience in Dublin that the chances of a border poll on Irish unification ‘go up’ if Britain leaves the EU without a deal in October. Photograph: Simon Carswell

A “crash-out Brexit” would make a political crisis over the future status of Northern Ireland “more likely”, the Conservative MP and former UK attorney general Dominic Grieve has said.

Speaking on a visit to Dublin, Mr Grieve told reporters that the status of the North remaining within the UK under the 1998 Belfast Agreement “would be thrown into jeopardy” by a no-deal Brexit.

“Brexit is probably likely to put it under strain even if it is done in a controlled fashion,” he said.

Loyalists may feel, like nationalists did in the Troubles, their constitutional status and way of life was at risk

The Tory MP, who favours a second referendum to resolve the UK’s political crisis over Brexit, said that the chances of a border poll on Irish unification “go up” if Britain leaves the EU without a deal in October.

Mr Grieve voted to remain in the EU in the 2016 referendum.

He said he was concerned about the prospect of violence returning to the North in the fallout over the manner of the UK’s exit from the EU because loyalists may feel, like nationalists did in the Troubles, their constitutional status and way of life was at risk.

“It worries but I think I know Northern Ireland well enough that acceptance of change, even if you have a minority status, doesn’t always follow,” he said.

The history of the Troubles shows that “a series of perfectly clear grievances” held by nationalists in Northern Ireland meant that some would not accept “ordinary democratic processes”.

“There were enough of them to create violence and, in exactly the same way, the same exists within the loyalist community,” he said.

“Bringing about Irish unification, in a way, through the mechanism of Brexit has always struck me as being a very bad idea.”

Mr Grieve said he would be “very surprised” if Boris Johnson does not become the new UK leader this month. He expects a “period of major political crisis” in the run-up to the October 31st Brexit deadline given that Mr Johnson has threatened to leave with no deal if he cannot negotiate a better one with the EU.

He believes that a no-deal Brexit is unlikely given that there is a clear parliamentary majority against it.

“I can’t be certain there won’t be one, but my own personal thoughts on that is that it’s unlikely,” he said.

Mr Grieve delivered a comprehensive and at times entertaining address to the Institute of International and European Affairs (IIEA) on Brexit and the “strange revolutionary situation that we find ourselves in the United Kingdom”. He acknowledged that it had “an immediate and worrying bearing” on people in Ireland.

The Conservative MP said that there were “a hardcore” of pro-Brexit MPs in his party who had become “completely Talibanised” but that their “Talibanisation” was a reflection of opinion among Tory members.

Why should I inflict Dunkirk on my country? There seems to be this masochistic streak

He drew laughter at the event when he said he receives angry emails from Brexiteers asking: “Where’s your Dunkirk spirit?” – a reference to the second World War evacuation of British troops from the French coastal town.

That was “a terrible moment of collapse of British power masked by Churchill’s rhetoric,” he said.

“Why should I inflict Dunkirk on my country? There seems to be this masochistic streak,” he said.