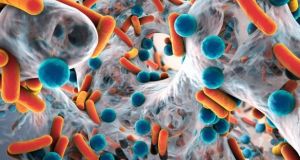 Overcrowding, aging hospital infrastructure and a lack of isolation facilities, were recurring challenges in trying to prevent and control the outbreak of Carbapenemase-Producing Enterobacteriales (CPE).

Of the five hospitals inspected, only Louth County Hospital was in compliance with the HSE’s new screening guidelines for controlling the superbug. Screening is required to identify patients with CPE infection and to minimise further transmission to patients.

The HSE guidelines were published October 2017 in response to the Minister for Health’s declaration of a National Public Health Emergency in relation to a CPE outbreak in Irish hospitals.

CPE is the newest in a long line of superbugs and is currently the most difficult to kill with antibiotics.

The infection resides in the bowel and causes infection in vulnerable people, such as the elderly and those with low immunity systems.

In some outbreaks more than half of patients who developed CPE-based bloodstream infections died as a result of the illness.

During an unannounced visit in January, Hiqa inspectors found Wexford General Hospital was not routinely screening patients who were transferred from nursing homes, which was deemed to be non-compliant and “high risk”.

Similarly, Beaumont Hospital, which had been managing an outbreak of CPE since August 2018, presented a number of screening oversights during a February inspection.

At the Dublin city hospital, residents of long-term care facilities, as well as patients directly transferred from other hospitals and those who had been inpatients in another Irish hospital in the previous year were not routinely screened for the infection.

The report says due to these factors, “it is likely that the true incidence of CPE in the hospital may be underestimated.”

Following the inspection, the hospital’s Chief Executive provided written assurance to Hiqa that screening of patients from long-term care facilities was introduced in March, and gave a commitment to full compliance.

A Hiqa spokesman said: “To concur with HSE national recommendations, each hospital group must identify a group decontamination lead and each hospital should progress the centralisation of decontamination activity.” Furthermore, microbiological testing of environment and equipment needs to be implemented.