Varadkar denies Hogan nomination is a blow for gender balance 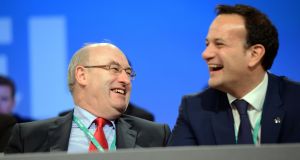 Taoiseach Leo Varadkar (right) has defended the decision not to nominate a female candidate for the European Commission alongside outgoing agricultural commissioner Phil Hogan (left). Photograph: The Irish Times

Taoiseach Leo Varadkar has defended the decision not to nominate a female candidate for the European Commission alongside outgoing agricultural commissioner Phil Hogan.

The new EU Commission president Ursula von der Leyen of Germany has asked all member States to nominate two candidates, one of whom should be a woman.

However, the Government has submitted just one name to the Commission, that of Mr Hogan.

Asked on Friday what this decision said about gender balance in the Irish Government, Mr Varadkar replied that Fine Gael had more councillors, TDs and MEPs than any other Irish party.

“We are practicing what we preach,” he said.

“When it comes to the top European positions we have renominated Phil Hogan for the EU Commission.

“We have an Irish woman (Maireád McGuinness) who is first vice president of the EU parliament and an Irish woman (Emily O’Reilly) who is the EU ombudsman and we are putting forward Phil Hogan for the EU Commission.

“There’s a good balance there,” he argued.

The Taoiseach was speaking in the Aviva Stadium at the launch of Future Jobs, a new policy of the Government’s to create higher quality jobs in the SME sector.

There was a call for gender balance in the allocation of the four most powerful roles in the EU. In the event, two women were appointed to the roles: Ms von der Leyen to the Commission and former IMF head Christine Lagarde as head of the European Central Bank.

The nomination of Ms von der Leyen also made redundant the input of the EU parliament into the decision to choose the Commission president.

Its own contest, “Spitzenkandidaten” (choosing the lead candidate), was used to nominate Jean-Claude Juncker five years ago but the candidate who emerged this time, German MEP Manfred Weber, was not selected.

At the most recent EU summit in Brussels earlier this month, Mr Varadkar defended the decision on the basis that compromise was sometimes needed in EU politics to arrive at a consensus decision.