Monica Smyth a long-time resident of Bulloch Harbour near Dalkey, Co Dublin speaks to Kitty Holland about her concerns for the area in the light of planning permission being granted for a controversial development near her home. Video: Bryan O’Brien 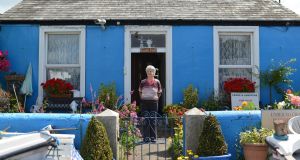 A planned luxury development at a south Dublin fishing harbour should be “halted” and the site purchased by the State to guarantee continued accessibility to the public, campaigners have said.

The Bulloch Harbour Preservation Association may seek a judicial review of the decision by An Bord Pleanála to grant the development at Bulloch Harbour in Dalkey. However, its co-chair PJ Drudy said this could prove prohibitively expensive, at about €80,000, and fundraising would be necessary.

Activists and local residents said they would “fight every inch of the way” plans by Barta Development for three three-storey houses, apartments, parking spaces, a cafe and a new public square, in the small inlet. It would mean the “effective privatisation” of the amenity and “ordinary working people won’t be welcome any more,” they said.

Permission was granted by An Bord Pleanála last month, overturning the refusal by Dún Laoghaire-Rathdown County Council last year and the recommendation of its own inspector in May.

The inspector said refusal should be on the grounds of flood risk and the development would be “seriously injurious to the special character and amenities of the harbour”. Ideally, Mr Drudy said, “it would be bought by the State and public access preserved”. “This is far from over,” he added.

Local TD Richard Boyd Barrett said “the State must in some form - whether it’s the local authority or another body - halt this and compulsorily purchase the site”. “I am disgusted that An Bord Pleanála would ignore the concerns and opposition of the overwhelming majority of people and allow a development that will effectively privatise a vital local amenity.

“We will fight this every inch of the way” said Mr Boyd Barrett, while.

Monica Smyth (82) has lived in a seaman’s cottage at the harbour since 1958, having “come down to ground level from Dalkey Hill” to marry her late husband Dermot. A lobster fisherman, he drowned hauling lobster pots in 1974.

She has continued selling crab and lobster from the cottage, and renting out boats to day-trippers. Her daughter Dolores lives with her, collecting the crustaceans daily from their 30 pots offshore.

“Anyone who spends millions on one of the houses, they won’t want the things that make the harbour what it is – the people coming from all over to sit and relax down there. They won’t put up with that, or with fish boxes being thrown in at the pier at 5am every morning, or the seagulls flying over, or the smell of the bait for the lobster pots, or the hundreds of children who come to climb on the rocks. They’ll want to get rid of that. But for us, they’re the things that tell us we’re alive.”

Mr Drudy said the association would be “watching like a hawk” how Bartra Developments complies with one of the conditions attached to the permission – that they must detail the “water supply and drainage arrangements [for] disposal of surface water and seawater from overtopping in extreme flood events”.

It believes this may be an impossible condition to meet given recent serious flooding in the harbour and damage after storm Emma last year.

Neither the council nor An Bord Pleanála would comment on the case.

Mike Flannery, chief executive of Bartra Developments, said he was studying the decision. “Bartra looks forward to enhancing the environs of Bulloch Harbour on the back of this decision,” he said.